The winter solstice is celebrated by cultures the world over as a day of hope and resilience. 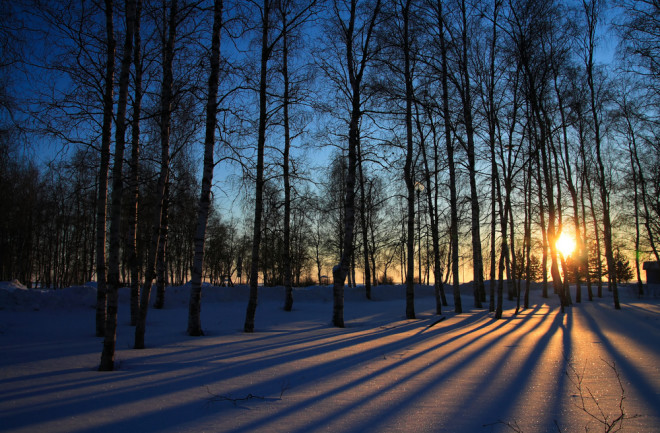 On Dec. 21, the northern hemisphere celebrates the winter solstice, the shortest day of the year, or the longest night. While it's the darkest time of the year, the day also marks a turning point. From here on out, the the sun shines a little longer each day, and we begin the slow march toward spring.

Fittingly, the winter solstice is celebrated by cultures the world over as a day of hope and resilience, and has figured prominently in religious rituals. For the ancient Romans, the winter solstice was marked by the Saturnalia festival, a week-long celebration where traditional roles were upended amid feasting and drinking. Masters waited on servants, gambling was temporarily legal and the social hierarchy was upended.

In Iran, the solstice was marked by the Yalda night, when families gathered to eat, drink and recite poetry with each other. Foods colored red represented the rising sun and the return of life. The Yule celebration, from which the modern Christmas celebration emerged, was observed in Europe by the Germanic people, and involved hearty foods, drinking, decorations and usually some variation of an elf or old man bearing gifts.

While many solstice celebrations have been lost to the ages, we can still see their echoes in ancient works of architecture spread across the globe. On this day sunlight penetrates structures kept dark all year in clear commemoration of the year's shortest day.

One of the most recognizable monuments in the world, Stonehenge, has been found to mark the arrival of both the winter and summer solstices. On the winter solstice, the stones are perfectly aligned with the setting sun, and a crowd of thousands gathers to witness the occasion.

Pagans, for whom the both the solstice and Stonehenge hold special ritual significance, tend to be well represented.

During sunrise at the winter solstice, the sun shines directly through the gap in the walls seen at the center. (Credit: Pakhnyushchy/Shutterstock)

Located in Egypt amidst a vast complex of ruins, the shrine to the sun god is illuminated during the winter solstice. On this day, the rising sun shines between two pillars, casting a bright beam of light through the complex. The Egyptians were keen observers of the sky, and many of their monuments, including the pyramids, are aligned with the sun or the stars. For them, the winter solstice was a celebration of the god Horus, a deity of the sky, sun and moon.

A vast circular monument in Ireland, Newgrange predates Stonehenge. The structure measures some 250 feet across and is around 40 feet high, and was likely used as a tomb. Built around 3200 B.C., the monument features a single narrow passageway leading into its center for about 60 feet, with several small chambers at the end.

Hundreds of people gathered at the Newgrange Neolithic passage tomb in Co Meath to celebrate the winter solstice pic.twitter.com/4p6DP5z8Q6

During the winter solstice, the sun shines down the length of the passage and into a chamber through a special hole built into the roof just above the main entrance. The event lasts for less than 20 minutes and is so popular that visitors must enter a lottery for the privilege of attending.

This series of concentric ditches was constructed in Germany some 7,000 years ago during the Neolithic period. It measures about 250 feet across and once contained a ring of logs with gates used to measure the movement of the sun. On both the winter and summer solstices, the gates lined up perfectly with both the setting and rising sun, as seen from the middle of the enclosure. Archaeologists believe that the structure functioned as a primitive kind of calendar, allowing its ancient builders to track the course of the sun and the moon. Other, similar rings can be found throughout Europe.

The Inca are renowned for their astronomical skill, and they based a complex series of annual rituals on the movements of the sun, moon and planets. Their attention to the sky is embedded into the architecture, and archaeologists have found structures related to both solstices in Inca cities. In Machu Picchu, an out-of-the-way cave reveals a subtle surprise for 20 days surrounding the December solstice (which occurred during their summer) — it is only during this time that light is allowed to enter through a small hole in the wall and illuminate the cave. The rocks surrounding the hole are shaped like a condor, a bird that represented the gods to the Inca, and the timing coincides with the month of Capac Raymi, when boys of noble birth would be initiated to manhood.