Honeybees Know What 3 Means (and 2 and 4), Researchers Find

This means that honeybees can recognize a specific value, not just a relative value. 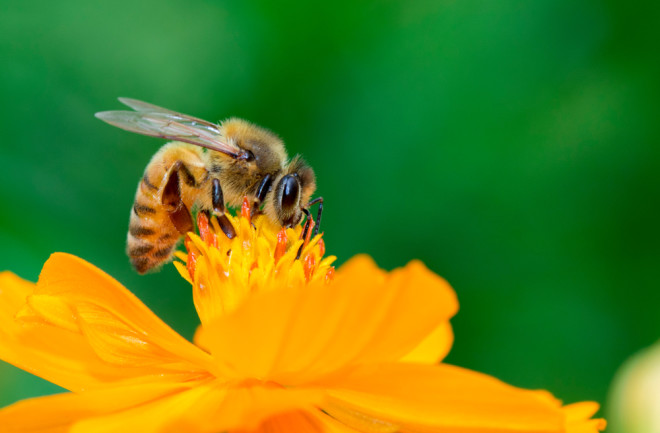 Humans, monkeys, pigeons, fish and honeybees can all grasp the concept of a greater than or less than sign and choose between bigger or smaller quantities. Now, new research from a team led by Martin Giurfa at Paul Sabatier University in Toulouse, France is the first to show that honeybees, like other vertebrates, can also recognize a specific value, not just a relative value. That means they know the number 3, instead of simply recognizing 3 is greater than 2. The study, published today in Biology Letters, is an “important contribution” and “part of a growing body of work” on bees’ mathematical cognition, according to Adrian Dyer, an insect vision scientist at RMIT University in Australia, who was not involved in the study.

We already knew honeybees can add, understand zero and recognize numerical symbols. These new findings suggest that bees can flexibly use both absolute and relative numerical reasoning, which is similar to the kind of reasoning that humans have.

3 Is the Sweetest Number

To figure out whether bees make decisions using exact numbers, instead of just relations like bigger or smaller, researchers first trained bees using a Y-shaped box. Like coming to a crossroads, each bee in the study had to decide which way to go to receive a tasty sugar water reward.

The bee can choose to go down either path of the Y-shaped box, toward the three dots or two dots, to receive a reward. (Credit: Bortot et al. 2019 Biology Letters)

Half of the bees saw signs indicating a value of 2 vs 3 — the appropriate number of dots — while the other half saw signs for 3 vs 4. Both sets of bees were rewarded during training for picking the 3 path, which was the larger number for the first half of bees and the smaller number for the second half of bees. Importantly, the visuals included circles of slightly different sizes and densities, so that number value was the only constant feature that bees could depend on. They really were learning the meaning of 3, in other words, and not just a specific image of dots.

After training, bees again came to the crossroads in the Y-shaped box, but now had new signs to deal with. One was somewhat familiar to both groups because it was still just 3 dots, though in a new arrangement. But the other sign had a new number of dots: Bees whose training included the number 2 saw the sign for 4, and vice versa.

Learning the value of 3 was more difficult when it was compared to 4 than when it was compared to 2. During training, the 3 vs 4 bees were 50/50 on whether they chose 3 or 4. In contrast, the bees that had to choose between 2 and 3, chose 3 closer to 70% of the time, indicating they were not choosing randomly. Because bees responded differently to these pairs that are both sequential, the researchers believe bees, like humans, are affected by the numerical size effect.

In humans, this effect can be seen with much larger numbers – we have much more difficulty determining whether there are 100 or 101 pieces of candy in a jar than we would with 10 and 11 pieces even though the difference is the same in both pairs. For bees, the limit that they can easily identify might be around 4 or 5, but previous studies are not entirely clear. This parallel between social insects and humans brings up new questions about bees’ mathematical cognition.

Is 4 the actual limit of how high bees can count? Does it matter if bees count objects all at once, instead of one by one? Giurfa hopes to verify the answers to these questions in follow-up studies and to connect this invertebrate mathematical cognition with other evidence of bee intelligence.

For researchers, identifying the neural mechanisms underlying bees’ computation may be a long way off. But once we understand how bees perform fairly complex tasks with much smaller and simpler brains, Dyer says, this could eventually inspire more efficient computer chips (I Bee M, perhaps), which are currently modeled on mammalian neurons.