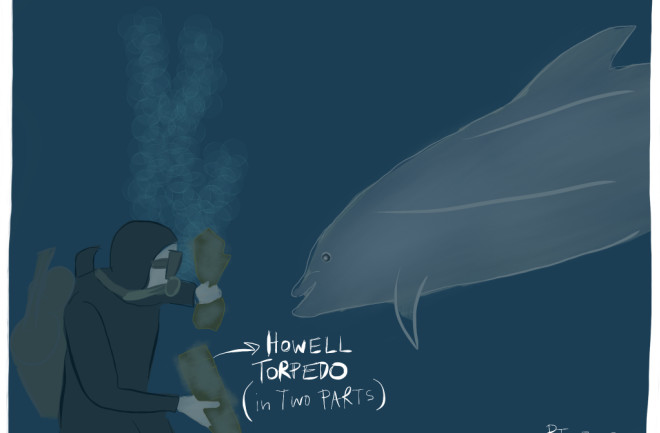 Dolphins have uncovered a marvel of naval history: the 125-year-old Howell torpedo, the first torpedo that could be released into the ocean and follow a track to smash a target without leaving a wake. Only 50 were made between 1870 and 1889 by a Rhode Island company before the competition copied the design. There are two others of its kind known to exist, housed in naval museums in Washington and Rhode Island. Now dolphins working for the Navy have turned up a third.

The dolphins are trained to dive in search of underwater objects like mines or lost naval swimmers. On a search, they touch the front of the boat if they’ve found something, and the stern of the boat if not.

In March, on a routine mine-hunting training exercise, a dolphin named Ten surfaced and touched the front of the boat in an area the team didn’t expect to find anything, so they ignored it and moved on. When a week later another dolphin named Spetz did the same thing in that area, they sent Spetz to mark the object’s location with a weighted buoy line. Further investigation revealed a broken torpedo in two parts, which the navy ultimately identified as a long-lost Howell torpedo.

Since the 1960s, the Navy Marine Mammal Program has been training dolphins to find mines, underwater objects expensive enough to warrant a search rather than a replacement, or weapons that might be a danger to Navy vessels. Dolphins use echolocation to map and navigate space, sending out calls and assessing distances and shapes based on the echoes they receive as their sounds bounce off objects in the environment. This capacity is the most sophisticated sonar known to man, an ability humans can barely understand, but which we have attempted to mimic in our own sonar technology.

But naval dolphins might soon be out of a job: in 2017, the US Military may begin retiring dolphins in favor of cheaper mine-hunting robots.

Honeybees Associate TNT with Sugar and Help Save Lives

The honeybee may be the ideal mine-hunter: its minute stature, plus a natural talent for detecting the smell of explosives, means bees are able to wander through a Croatian field littered with landmines and detect them without being harmed.

Nikola Kezic of Zagreb University, a honeybee behavioral expert, is training bees to associate the smell of TNT, the most common explosive of the Balkan Wars, with food. By conducting trainings where TNT is placed in the same containers as sugar water, Kezic is training one bee at a time to navigate towards the TNT.

During the Balkan wars of the early 1990s, 90,000 land mines were littered around the area with no plan and no map. Since the wars ended, over 300 people have died from exploding landmines, and these accidents occur most frequently in areas thought to be de-mined, where landmines can remain buried in soil.

Once the training is brought to scale, the Tiramisu project, which funds Kezic’s work, hopes to track the bees’ movements with heat-seeking cameras, making it possible to find and deactivate the lethal mines by tracking the movements of the swarm. Kezic says there is a great difference between training one bee and a swarm of bees, but if critical mass could be achieved, these animals would be able to help identify unexploded mines without getting harmed in the action---unlike previous minehunters such as dogs and rats, whose weight can trigger the mines.