Honey May Be Bees' Best Medicine for Colony Collapse Disorder 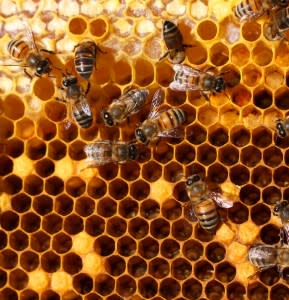 Much of the food that fills your dinner plate can only be produced with the help of a highly managed insect species: the western honey bee. Many farmers actually rent commercial colonies to unleash on their fields when the crops are in bloom. Such pollination services rake in $14 billion a year in the United States. But honey bee populations have plummeted in the last half decade as worker bees have mysteriously flown off and never returned to the hives---a phenomenon now called Colony Collapse Disorder. Scientists are stumped. Some blame malnutrition. Others point fingers at pathogens. Perhaps it's pesticides. New research has identified a particular chemical in pollen that may finally provide an answer. Western honey bees have a taste for a range of nectars, so they are exposed to many different chemicals in and on the plants they pollinate. In addition, commercial hives are often treated with insecticides to kill parasitic mites. The trouble is that the western honey bee doesn't have a lot of defenses: only 46 of its genes (about half that of most insects) can metabolize these potentially dangerous chemicals. Even more important than how many genes the bees have is knowing what kicks these genes into gear. For the first time, researchers have identified the chemicals that regulate these genes, and have determined that many bees raised in commercial colonies don't get enough of them. The researchers identified a handful of chemicals that boost these detoxifying genes. The most potent was an acid called p-coumaric acid, which is found in pollen grains. By eating honey, which contains traces of pollen, the bees become less susceptible to the range of pesticides and pathogens they encounter on their pollinating exploits. Wild bees are normally raised on honey, so there is no shortage of p-coumaric acid in their diets. But commercial colonies raised for agricultural pollination aren't so lucky. To cut costs, many bee keepers harvest and sell the honey their bees produce and instead feed the growing bee babies high fructose corn syrup or other sweeteners. While nutritionally comparable, the researchers say these sugars lack essential chemicals like p-coumaric acid. This was borne out by a test in which researchers fed some bees sucrose, and some sucrose with p-coumaric acid. Bees whose diets were supplemented with the acid were able to break down 60 percent more of the mite pesticide than those raised on sucrose alone. The results were published in Proceedings of the National Academy of Science this week. Thus, while a spoonful of sugar may make the medicine go down, a spoonful of honey may prove a better way to keep honey bee populations healthy. Image courtesy of LilKar/Shutterstock