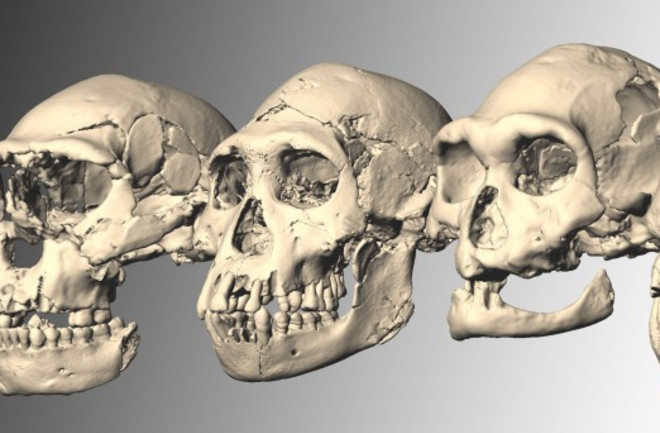 Five skulls from the same time period, including the world's first complete adult skull of the Early Pleistocene (far right), suggest early hominids may have been a single Homo species. Image courtesy of M. Ponce de Leon and Ch. Zollikofer, University of Zurich, Switzerland. Our family tree may have just lost a few branches. A complete skull found in the Eurasian country of Georgia could be evidence that early hominids are actually all members of a single species. The view challenges long-held ideas about human evolution and could upend decades of classifying early hominids into different species, such as Homo erectus,Homo rudolfensis and Homo habilis. Researchers publishing their analysis of the 1.8 million year old find in Science today argue that the skull's combination of primitive and more evolved features make it difficult to classify by currently accepted definitions of early hominid species. In addition, variations between the skull and those of other early hominids found at the site are no more significant than differences among modern humans, suggesting the fossils represent one species.

The face of Skull 5. Credit: Guram Bumbiashvili, Georgian National Museum Skull 5, from a partially excavated site at Dmanisi, Georgia, is the world's first complete adult skull found from the Early Pleistocene period, according to the study's authors. The skull's cranium and jaw bone were found five years apart, about six feet from each other, but researchers are confident they came from the same individual. The skull has a mosaic of both primitive and more evolved features, such as a small braincase and long face, not previously seen together in the fossil record. Researchers found additional remains associated with Skull 5 that suggest the individual had a stature and limb-to-body proportions within the range of modern humans. The researchers believe that Skull 5, based on its massive size, was likely a male. Their analysis also found that the individual had suffered a fractured cheekbone in life as well as arthritis.

All in the Family

The context of the Skull 5 find could prove to be as valuable as the skull itself. Skull 5 was co-located with partial skull remains of four other early hominids, as well as animal fossils and stone tools, all about 1.8 million years old. Researchers say this is the first time they have been able to study a population sample of early hominids who lived in the same location and time frame rather than individual remains.

How Skull 5's owner might have looked in life. Art courtesy of J.H. Matternes Scientists have long classified different species of hominids based on sometimes subtle variations as well as when and where they were found. But the five Dmanisi skulls exhibit a range of characteristics ascribed to hominid species spanning a vast geography and time period, from 2.4 million year old African remains to finds from Asia and Europe that are half that age. The team excavating the Georgian site suggest that the five skulls offer tantalizing evidence that there was only one early hominid species. To bolster their theory, they note that variations between the skulls are no more significant than variations between five modern humans or five chimpanzees.

A Bone To Pick

As excavations at Dmanisi continue, researchers expect to find more fossils — and perhaps more conclusive proof that normal variation within a single Homo species has been misinterpreted as species diversity. It might be time to rewrite the evolutionary history books.