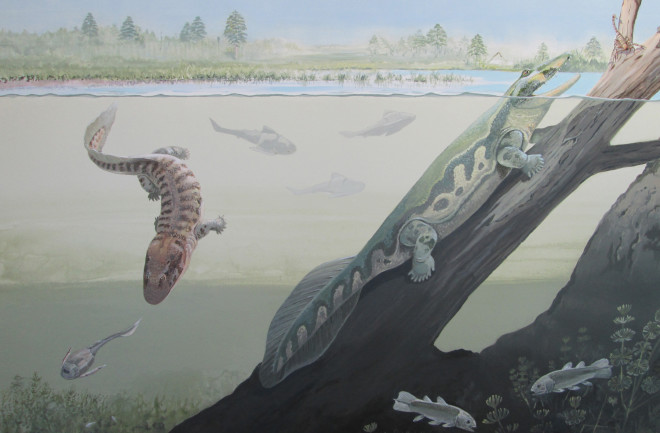 An artist’s reconstruction of the 360 million-year-old Late Devonian world in which the first known polar tetrapods lived. Tutusius, right, eyes potential prey while Umzantsia, left, dives deeper into the brackish estuary the animals called home. All animals and plants shown have been found as fossils at the same South African site. (Credit: Maggie Newman)

Hey, tetrapod! Yeah, I'm talking to you. There's a big update to the story of the earliest tetrapods — the first four-limbed vertebrates to move onto land and eventually evolve into us, among other things. The new find changes a fundamental assumption about our early ancestors, and it's pretty cool. Evolving from a branch of lobe-finned fishes more than 375 million years ago, tetrapods

gradually traded water for land over the next several million years. Eventually, they would become one of the most diverse superclasses of life on Earth, evolving into lineages as diverse as pigeons and polar bears, lizards and Labradoodles...and humans, of course. A few key questions have lingered about the early tetrapods

, one of them being their distribution. For decades, the only early tetrapod fossils (and, earlier still, proto-tetrapods sometimes called "fishapods") were from locations that would have been tropical or subtropical back in the Devonian Period. Some researchers believed that this made sense: It's hard enough to adapt from living the life aquatic to landlubbin', why try it in an upper latitude spot where it would have been even more challenging due to a colder climate and, at the highest latitudes, months of darkness during winter? Other researchers, however, suspected that the tropical tetrapods were only part of the picture, and that the apparent distribution was actually sampling bias: You can only find fossils in locations where you look, so if you don't look somewhere for a fossil, you won't find it there (duh). That's not to lay sampling bias entirely at the feet of researchers, however. Finding a Devonian tetrapod fossil requires rocks of the correct age, conditions at the time of the animal's death that allow for rapid burial and preservation, and then undisturbed preservation for hundreds of millions of years. Up against these odds, it's not surprising that tetrapod fossils have been so few. In addition to being apparently limited to the tropics, Devonian tetrapods had turned up almost entirely on the paleocontinent of Laurussia, which today includes Europe, Greenland and North America. A single specimen and footprint were found in Australia (from a location that, while part of the southern continent of Gondwana rather than Laurussia, would have been tropical during the Late Devonian time), but ideas about the origins and evolution of the early tetrapods remained fixed on tropical locales in what's now the Northern Hemisphere. Well, it's time to rewrite the tetrapod distribution map, and this discovery's a doozy.

The (Antarctic) Circle Of Life

Paleontologist Robert Gess of the Albany Museum in Grahamstown, South Africa, has been chipping away, literally, at a potential treasure trove from the neighborhood: about 100 tons of shale collected over the past two decades. The shale would have been demolished during various construction projects, but Gess has been collecting and cataloging it, splitting it as time permits. He told me via email that he's only gone through about 20 percent of the haul, but has already found plenty of fossils. Among the most exciting finds: fragmentary remains of not one but two tetrapods that are about 360 million years old, during the Famennian Age, which was the tail end of the Devonian Period. At the time these animals lived, their location would have been about 70 degrees south (thanks, plate tectonics!). That's within the Late Devonian Antarctic Circle. So, no, they were not found at the South Pole, but they are polar.

Some 360 million years ago, the southern supercontinent of Gondwana straddled the South Pole (P). Until today’s announcement, the only tetrapods found on Gondwana came from about 30 degrees latitude, in what’s now Eastern Australia (blue asterisks). The South African tetrapods (black asterisk) lived at about 70 degrees, within the Late Devonian Antarctic Circle. (Credit: Gess and Ahlberg 2018)

Consider that, until Gess split those particular pieces of shale, all Devonian tetrapods had been found at paleolatitudes of 30 degrees or less. Making the discovery even more important, the two tetrapods are new to science and considerably different from each other, suggesting that at least two separate tetrapod lineages were doing quite well thousands of miles from the nearest tropical hotspot. Why is this a big deal? As Gess puts it, it was "widely considered that tetrapod remains would only ever be found in Devonian tropical strata and that an understanding of the causes and processes driving tetrapod evolution could be deduced from studying the conditions that were possibly prevalent in Devonian tropical lakes and lagoons. The discovery of two tetrapods, very different from each other within the Antarctic Circle, on the other side of the South Pole at the far end of Gondwana, completely disrupts this assumption."Take that, conventional thinking.

He continues (emphasis mine, just because I love this so much): "It strongly suggests that Devonian tetrapods, at least by the Late Famennian, actually lived all over the world, from the tropics to the arctic, from one end of Gondwana to the other. In other words, they could equally well have originated in any climatic zone on any landmass."

today — but it was nowhere near tropical. "Temperature wise, I think that it might have been a bit like the west coast of South Island New Zealand, which is cold but swept by a warm southwardly moving ocean current, so it has lush coastal rainforests cut by glaciers coming down from the mountains," Gess says. Other fossils found from the same shale collection suggest the surroundings of the tetrapods, Tutusius umlambo and Umzantsia amazana, were rich in biodiversity.  "The tetrapods were living in a brackish estuary largely cut off from the sea by a sandbar. It had a mixture of marine and freshwater influences and contained a lot of debris from the surrounding woodland," says Gess. "It was used a nursery area for both marine and non-marine fish." Taking the South Island's west coast as an analog, freezing temperatures would have been possible but not common, and rainfall impressive: That particular stretch of the beautiful island nation (Kia ora, my Kiwi friends!) sees some of the highest annual precipitation on Earth. Given its paleolatitude, the tetrapods' home would have experienced months of polar darkness. To survive in such an environment, the animals likely adapted over generations, suggesting their lineages may have been there for millions of years. Finding polar tetrapods isn't just a neat new surprise. I'll let Gess have the final word, providing the most compelling reason we should all be interested in this major update to the Devonian tetrapod story: "They may have started out in tropical water bodies, but there is no longer any real reason to believe this likelier than any other setting. So it's really an open book. Which is exciting. And it's kind of personal because amongst the Devonian tetrapods is the ancestor of all terrestrial vertebrates, including ourselves." The study

Reconstruction of polar tetrapods Tutusius and Umzantsia with fossils found shown in green. Though fragmentary, the pieces recovered are highly informative and allowed the researchers to determine the animals were species new to science and not closely related to each other. (Credit: P.E. Ahlberg/Uppsala University)