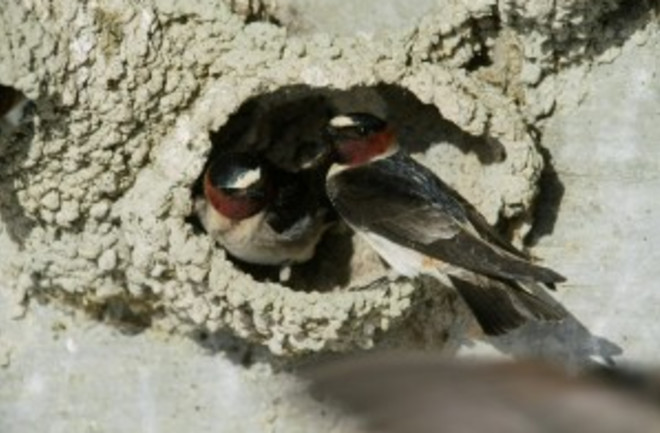 Cliff swallows in their nest I imagine that adjusting to life around humans, with all our buildings and fast-moving transport mechanisms, is tough for a bird. It's estimated that some 80 million birds are killed in motor vehicle collisions every year, and with an ever-growing population of people driving around and paving roads in more remote areas, things must be getting harder and harder for the animals we share our world with. But, the American Cliff Swallow (Petrochelidon pyrrhonota) isn't one to let people ruin the neighborhood. More and more, their huge nesting populations can be found in man-made structures like bridges and overpasses, and have even become cultural fixtures in areas like California. Their new nesting sites allow them to survive even as their former habitat disappears, but it comes at a cost: by living near roadways, the birds are more at risk than ever of being on the wrong end of an oncoming vehicle.

A massive colony located on an interstate highway bridge in Nebraska, showing how well these birds have adapted to living on man-made structures Charles and Mary Brown have been studying the cliff swallows in Keith County, Nebraska for the past 30 years. The ultimate goal of their research is to understand why colony sizes vary, and together, the two have studied everything from parasites and diseases to social interactions between birds, with over a hundred publications between them. The American Ornithologists Union describes their three-decade long research on cliff swallows as "one of the most outstanding and most complete studies of any avian species." Every year, the team monitors the birds and collects any dead ones they can find for further analysis. Slowly, they noticed something strange: even though nests under overpasses and on bridges should have put more swallows in harms' way, over time, fewer and fewer swallows are winding up as roadkill.

A graph from the study showing the steep decline in road killed swallows over time, in spite of increasing populations It wasn't reflective of the population. Over the past 30 years, the cliff swallows have been thriving, increasing from under 10,000 nests in the '80s to over 25,000 three decades later. Nor was decreased road traffic to blame — the number of cars on the roads has been steady if not slightly increasing over time. They couldn't finger local scavengers for eating them because the number of these species hasn't been increasing, and some, like skunks, have been declining. That left only one possibility: the birds themselves were somehow avoiding cars. To understand how, Charles and Mary looked back at all the dead birds they collected. One feature stood out: the birds that ended up as roadkill had significantly longer wings than the ones that didn't. Long wings are a benefit in certain environments. Longer, pointier wings provide increased lift and less drag, making it easier to spend lots of time in flight — a huge plus if, like the cliff swallows, you migrate long distances seasonally. A lot of birds, including most swallows, have long wings for their body size because they spend a lot of time catching flying prey like insects, and longer wings reduce the effort needed to glide and maneuver in the air. But while short wings are less efficient once in flight, they provide a bigger boost from the ground, allowing birds a near-vertical takeoff. When you're trying to jump out of the way of a speeding car, the faster you can get out of range of the vehicle, the better.

An unfortunate swallow that didn't get out of the way Not only did the team find that the roadkill birds had longer wings, they found that over time, the overall wingspan of the cliff swallow population in Nebraska has been declining. While it's possible that other factors are influencing this change, the research pair think the selective pressure to avoid cars is the real driver. "Evolution is an ongoing process, and all this — roads, SUVs, and all — is part of nature or 'the wild'," explains Charles Brown. "They exert selection pressures in a way we don't usually think about." This isn't the first study to look at the effects of vehicular mortality on animal populations. But, usually, the results are quite gloomy; for example, a study in 2002 found that roads are likely a large cause of decline in turtle populations. Similar results were echoed in a study on rattlesnakes, which found that road mortality increased the risk of extinction in the next half century from ~7% to 99%. And in other birds, like the threatened Florida Scrub-Jay, roads have been found to decimate younger generations. Charles and Mary's study, however, suggests that while roads can be a problem, some species are able to adapt to human-caused changes in environment. It also means we need to consider how our daily lives are affecting the world around us, not just immediately, but on an evolutionary scale. What do these shorter wings mean in the long run? While short wings might be adaptive for avoiding cars, are they making the long journey south for the winter harder? Are shorter wings making it harder for them to feed efficiently? Only time will tell for Nebraska's swallows. One thing is for certain: Charles and Mary will be keeping a close eye on the birds they have watched for three decades, and will let us know. Citation: