Herping and derping in the fish tank. 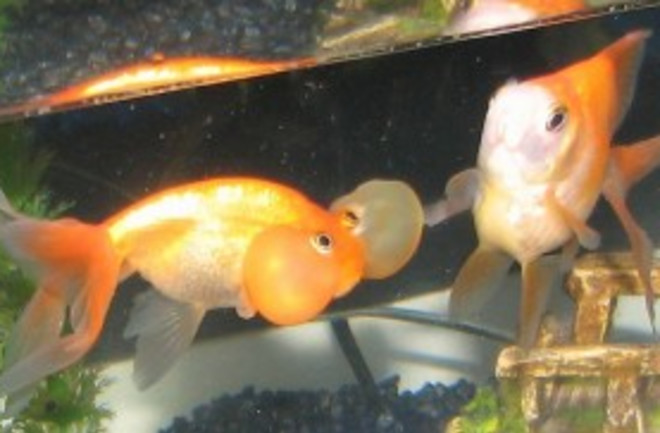 Photo: flickr/DanCenturySome goldfish are more equal than others...in swimming ability, that is. Although all breeds of goldfish share a common ancestor, they have been bred to look really different, with frilly fancy tails, bulbous eyes, or even missing some fins altogether. But how well do these crazy-looking fish actually swim? Well, funny you should ask, because here comes the science:Swimming in four goldfish Carassius auratus morphotypes: understanding functional design and performance employing artificially selected forms. "Four goldfish Carassius auratus morphotypes of similar length (50 mm): common (streamlined, full complement of paired and median fins, bifurcated caudal fin), comet ('common like' but with a long, deeply forked caudal fin), fantail (short, deep body with twinned caudal and anal fins) and eggfish (similar to the fantail but lacking a dorsal fin) were compared. Drag, steady swimming kinematics, energetics, fast-start performance, stability in yaw and roll and propulsive muscle ultrastructural characteristics were measured. A performance 'pairing' (common and comet; fantail and eggfish) was a recurrent theme for most performance variables. Fantail and eggfish drag were higher (requiring more thrust at any given velocity) than those for the more streamlined common and comet. This was reflected in kinematics; tailbeat frequency and stride length at any given velocity for the common and comet were lower and higher, respectively, than that of the fantail and eggfish. Common and comet fatigue times were not significantly different from those of their ancestor, crucian carp Carassius carassius, and higher than the fantail and eggfish. The cost of transport of the common and comet (c. 0. 6 mg O(2) kg(-1) m(-1)) was accurately predicted by the mass scaling relationship for fish, but values for the fantail and eggfish (c. 1. 3 mg O(2) kg(-1) m(-1)) were not. Rolling and yawing motions in eggfish (dorsal fin absent) during steady swimming were associated with significant energy losses. Eggfish maximum fast-start acceleration (c. 5 m s(-2)) was poor due to the absence of inertial and lifting contributions to thrust from the dorsal fin and energy wasting rolling motions. Common and comet fast-start performance (average velocity c. 0. 45 m s(-1), maximum velocity c. 1. 2 m s(-1), average acceleration c. 7. 5 m s(-2), maximum acceleration c. 35 m s(-2)) was similar to that of other locomotor generalists (e.g. rainbow trout Oncorhynchus mykiss). Artificially selected fishes can contribute to the understanding of form and movement in fishes and complement studies of the role of locomotor adaptations in natural systems."

Discoblog: NCBI ROFL: A foot needs a nipple like a fish needs a bicycle.

Discoblog: NCBI ROFL: Apparently, swimming with your clothes on is hard.