Hermit Crabs Line Up By Size to Exchange Shells 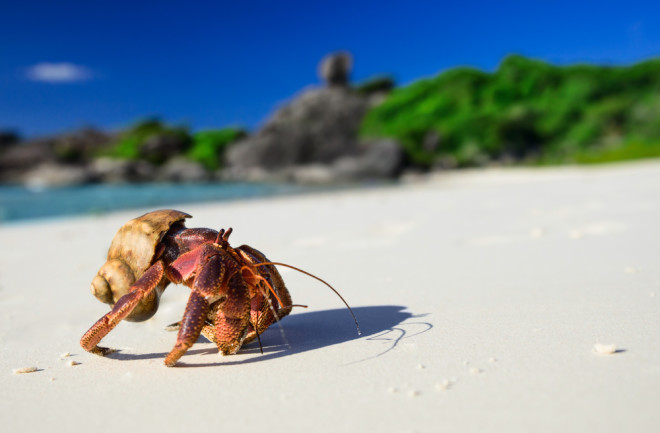 Anyone with an older brother or sister knows that clothes “shopping” often meant begrudgingly sifting through hand-me-downs rather than perusing the latest fashions at the mall. But for hermit crabs, the hand-me-down system isn't second-best, it's a matter of life and death. And as a new clip from the BBC show Life Story shows, the swapping process is remarkably orderly.

Hermit crabs need shells: without them, the critters will bake under the sun’s punishing rays, if they aren’t eaten first. The problem is hermit crabs are continually outgrowing their shells and the local real estate market is incredibly competitive. So when a spacious new shell washes up on shore, there’s a big to-do.

When a hermit crab spots a new shell, it’ll size up the shell for a good fit. If the shell is too big, the prospecting hermit crab will sit back and wait to steal the castoff shell of a larger crab that decides to upgrade. In the meantime, while the first crab waits, other crabs gather around the shell and do the same. When a crab large enough to fit the vacant shell arrives, a bit of orderly chaos ensues (video below).

The hermit crabs form a sort of conga line ordered from largest to smallest crab. As the largest crab enters its new home, the next crab in line takes the vacated shell, leaving an open shell for the crab behind him. The shell swapping continues down the line until everyone has upgraded. This chain reaction is called a vacancy chain, and it’s an ingenious way for the creatures to survive while sharing limited resources.

For the most part, hermit crabs’ present hand-me-down system works, however — that is, unless you happen to be the runt at the end of the swap line ... Better luck next time lil guy.