Here Be Dragons: The Mythic Bite of the Komodo 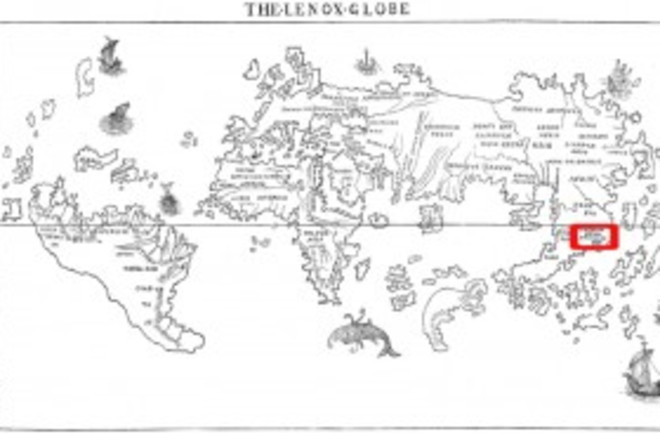 Here Be Dragons: first written on the Hunt-Lenox Globe c. 1510 as the latin phrase HC SVNT DRACONES. To a mediaeval mapmaker, the world was a vast and scary place. Explorers that braved the seemingly endless oceans in search of new worlds often didn't return, and those that did carried with them nightmarish tales of monsters and serpents. It was the mapmaker's task to warn future travelers of the dangers that awaited them in far-off lands. Based on their drawings, I cannot even begin to imagine the beasts that haunted these cartographer's dreams. Their creative expressions of fear were eventually distilled into a single, ominous phrase: here be dragons. Lands that still deserve this cartographer's omen, however, can be counted on one hand. They are the Indonesian islands of Rinca, Gili Motang, Flores, and Komodo — the only places in the world where dragons still roam. I am, of course, referring to the infamous Komodo dragon (Varanus komodoensis). This gigantic species of monitor lizard grows up to ten feet long and can weigh in the hundreds of pounds. It's no wonder, then, that for centuries Komodos have been feared by many, with tales of their deadly bite echoing through local cultures. It's even thought the monstrous lizards may have inspired the mythical beasts that share their name. Their villainous reputation only grew when these fearsome predators were discovered by Europeans in the early twentieth century. But of all the terrible tales told about these dragons, none has been so persistent and pervasive than that of their bite. The mouths of Komodos are said to be laden with deadly bacteria from the decaying corpses they feed on, microbes so disgustingly virulent that the smallest bite lethally infects prey. As the story goes, Komodos have turned oral bacteria into a venom. It's a truly fascinating way for an animal to feed — well, truly fascinating in that it's not true at all. While man's best friends were once falsely accused of perfect oral hygiene, the poor dragons have been dubbed dental delinquents for the better part of the past half century. It appears that the filthy rumor started with early Komodo biologists in the late 1970s to early 1980s. Esteemed herpetologist Walter Auffenberg spent an entire year on the island of Komodo, watching and tagging the lizards to learn about their ecology. In his book on the subject, he noted that dragons fearlessly tackle animals like water buffalo that can be ten times their size. He also noticed that, often, they would fail to kill these massive prey when they attacked. But that didn't mean the dragons went hungry — within days of that first bite, many of the bitten buffalo succumbed to sepsis, either dying from bacterial infection or so weakened by it that they were no match for the large lizards. This led Auffenberg to the idea that "induction of wound sepsis and bacteremia through the bite of the Komodo dragon may be a mechanism for prey debilitation and mortality." Further research seemed to support this hypothesis, as pathogenic bacteria were isolated from Komodo saliva.

A squeaky-clean Komodo dragon But the idea that Komodo mouths were these teeming pits of virulent bacteria never sat well with Bryan Fry. "Komodo dragons are actually very clean animals," he explains. Fry, venom researcher and Associate Professor at the University of Queensland, has worked with all kinds of animals, from spiders to snakes. The notorious Komodos are no dirtier than any other species he's studied, he says. "After they are done feeding, they will spend 10 to 15 minutes lip-licking and rubbing their head in the leaves to clean their mouth... Unlike people have been led to believe, they do not have chunks of rotting flesh from their meals on their teeth, cultivating bacteria." Komodos, like other monitor lizards, are close relatives of snakes. In 2005, Fry and his colleagues published a paper in Nature showing that all of the species in this clade of reptiles share the same venom genes, suggesting that the early ancestor of all monitor lizards and snakes was venomous. Still, many were reluctant to give up on the long-held belief of a bacterial Komodo bite. Even in 2009 when Fry and his team captured images of Komodo venom glands using MRI technology and showed that the toxins they produced could cause severe drops in blood pressure, others called his findings "meaningless, irrelevant, incorrect or falsely misleading." This month, the dirty myth of the Komodo's bite is finally laid to rest, the last nail in the coffin again coming from Bryan Fry. In a new paper, Fry and his colleagues show that the bacteria present in Komodo mouths are surprisingly ordinary, similar to what scientists find in any carnivore. Most importantly, the oral flora doesn't posses the pathogenicity required to kill. As for the previous research that found virulent bacteria, the authors note that those species were identified "without the advantage of molecular methods." Of the 54 that previous research claimed to be "potentially pathogenic," 33 are actually common microbes and "unlikely to be the cause of rapid fatal infection when present in a wound." The one species hailed as the probable cause of sepsis in the original paper wasn't found in any of the dragons this time around, and, the authors note, was only found in 5% of the dragons studied in the first place. Taken together, the evidence suggests that the bacterial bite hypothesis doesn't hold up. Rather than sepsis waiting to happen, the bacterial community in Komodo spit "is reﬂective of the skin and gut ﬂora of their recent meals as well as environmental ﬂora." What about the water buffalo that die days after being bitten? The explanation, Fry says, has been right under our noses. When Komodo dragons attack pigs or deer, they kill quickly. Three quarters of these smaller prey bleed out within 30 minutes from massive wounds inflicted by the dragon's serrated teeth and anti-clotting venom toxins. Another 15 percent die within hours, likely succumbing to muscle weakness and low blood pressure caused by other venom components. Water buffalo, on the other hand, usually get away with deep but otherwise non-mortal wounds to their legs. The reason the buffaloes get away is that Komodos aren't naturally equipped to take down such large beasts. As relative newcomers in the Komodo's realm, water buffalo weren't originally a part of the dragons' diet. The lizards once preyed upon much smaller targets, the young of megafauna long extinct. Pigs and deer aren't original menu items either, but as Fry explains, "the introduced pigs and deer are within the natural prey size," which is why the dragons are so good at killing them. "The buffalo are dramatically larger than would have been a reasonable size for komodos to kill." It never made evolutionary sense that Komodos had adapted such a targeted way to take down large prey within such a brief period of contact. Now, the evidence suggests they didn't — they just got lucky that the buffalo's instincts are all wrong. Water buffalo get their name from their affinity for — Surprise! — water. When injured or scared, they flee to the relative safety of the deep. These buffalo aren't native to the Indonesian islands; they evolved where large, fresh marshes are commonplace. But on the dragon isles, clean water pools are in short supply. The buffalo instead wallow in stagnant, warm water filled with their own feces. These sewage filled holes, says Fry, are breeding cesspits of pathogenic bacteria. "It is when the water buffalo go stand in the toxic water with gaping wounds that they get infected," he says. "It really has been that simple all along." As for previous research that found nasty bacteria in Komodo saliva, Fry has an equally straightforward response: the few dragons that had these species in their mouths had recently drank the same disgusting water. Fry is all too familiar with just how nasty some of these bacteria can be. "Having gotten septicaemia in Flores from deep lacerations resulting from a boating mishap," he said in a Facebook post, "I can attest to how quickly such environmental sources can produce life threatening infections." Komodo dragons — lizards the size of men with large, serrated teeth and a venomous bite — certainly are the stuff of legends, but their septic bite is nothing more than a myth. Scientists don't always get things right the first time around, and sometimes, even the most careful observations can miss what's really going on. In this case, the strange interaction between a novel meal option and a notorious beast confused early investigators. "If water buffalo had never been introduced onto the islands, then this enchanting fairy tale never would have come into existence," says Fry. The truth, of course, is of little comfort to anyone planning to visit the islands where dragons roam. Don't worry, you won't die of sepsis from a Komodo bite. You'll just die when the gigantic lizard with inch-long serrated teeth dripping with hemorrhagic venom tears your flesh to shreds. Citation: