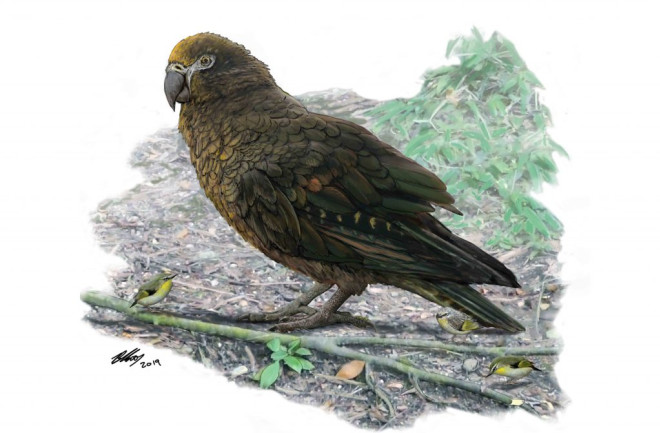 If you tried to feed a cracker to this polly you might lose a hand in the process. Paleontologists say they’ve discovered the ancient fossil remains of the world’s only known giant parrot.

The bird stood roughly 3 feet high. And scientists speculate it could’ve weighed as much as 15 pounds and packed a powerful beak some four inches long. The discovery knocks New Zealand’s charismatic kākāpō off its perch as the heaviest known parrot.

“It’s something quite unique,” said Jamie Wood, an extinct-bird researcher at Manaaki Whenua Landcare Research in Christchurch, New Zealand, who was not involved in the study. “Every fossil parrot that’s been found so far is smaller than a kākāpō, yet this was twice the size.”

Every summer for 18 years, paleontologists have been digging into the same patch of eroding bank in New Zealand’s arid Central Otago region.

Between 16 and 19 million years ago, this was an ancient lake-bed, swarming with prehistoric crocodiles, fish, and birds, most of which no longer exist. In those nearly two decades of excavations, researchers have discovered a mysterious “waddling mouse,” a giant burrowing bat, a dove related to the dodo, and an ancient kiwi that, unlike its contemporary cousins, may have been able to fly.

Despite the discoveries, this is not the kind of place where you can stumble upon a complete fossil skeleton. Of the 7,000 identifiable bird bones uncovered, most of them are just a fraction of an inch long.

But in 2008, the scientists pulled two six-inch leg bones from the riverbank.

“We thought they probably belonged to an eagle,” said lead author Trevor Worthy, a paleontologist who studies ancient birds at Flinders University in South Australia.

They put the fossils in the pile marked “eagles,” and that’s where the remains stayed for the next decade. But this year, when Ellen Mather, one of Worthy’s graduate students took a closer look, she realised they weren’t eagle bones after all.

That prompted Worthy and his team to forensically compare the bones to everything they could think of, he said.

“We can say with a high degree of certainty that it is a parrot — and because it’s so large, we knew instantly it was new,” Worthy said.

They called the new species Heracles inexpectatus after the muscled Greek hero, and the surprising nature of the find. “The next question is what it’s related to, and how it lived, and that’s more tricky,” Worthy said. “You kind of need other bones from the leg to have a better understanding.”

Still, he suspects Heracles is from the family of New Zealand parrots that includes present-day birds like the kākāpō, kākā, and the cheeky kea —renowned for using its sharp mind and beak to steal cigarettes and rip the rubber seals from car door frames.

“(The kea’s) most distinctive feature is their great big honker,” said study co-author Paul Scofield from the Canterbury Museum in Christchurch, New Zealand. Scale that up to giant-parrot size and you’ve got a formidable weapon four inches long, Worthy says of their newly-discovered parrot. “It would have been able to rip into trees quite happily and get out grubs, crack the hardest nuts open, dig up tubers — or possibly even pull seabirds out of holes in the ground,” he said.

Heracles is yet another example of “island gigantism,” the phenomenon where animals isolated on islands evolve to an abnormally large size. There are giant ducks in Hawaii, giant owls in the Caribbean, and Mauritius had the dodo — an extinct giant pigeon.

But most islands have just one or two giant birds. New Zealand has dozens (or at least it did before humans drove almost all of them to extinction): nine species of moa, two giant geese, giant rails and swans, the world’s largest eagle — and now, the largest parrot, too.

Why was this one archipelago home to such an outsized cast of beefed-up birds? Researchers cite the same reasons that New Zealand is swarmed by Instagram-happy tourists — its sheer variety of landscapes, from the Southern Alps to rainforests to arid plains.

That landscape and its long isolation from the rest of the world means “there was a lot more opportunity for more species occupy different niches and to become giant,” Wood said.

Now that he knows Heracles existed, Wood has more questions than answers. “We don’t know how common it was, what it’s related to, how it fits within the story of other parrots,” he said. “It’s fascinating to think what its ecology might have been.”

Finding more fossils is the only way to know, and the team plans to return to the dig site next season.

“There’s a whole lot of luck involved with paleontology,” Worthy said. “You never know when you’re going to turn over the right rock.”

Their study was published Wednesday in the journal Biology Letters.