Henry the Seal Can Discern Shapes Using Just His Whiskers 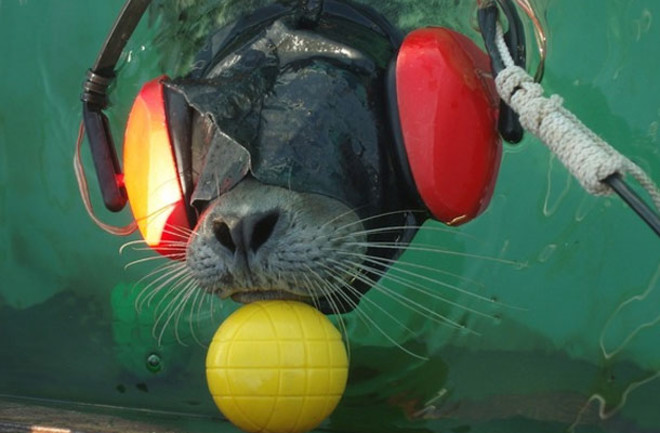 Blindfolded and fitted with noise-canceling headphones, this seal might better fit a marine-creature hostage crisis than a scientific study. In reality, it's making history by showing for the first time that the whiskers of harbor seals are so sensitive that they can discern the shapes of objects by the ripples they make. Marine biologists have known for a while that seals use their whiskers to find fish in dark, murky waters, but as lead researcher Wolf Hanke told LiveScience, whiskers had "never been shown to analyze things" beyond that. Being able to discern shape and size means that seals may use their whiskers to pick out the fattest fish.

Henry, a 12-year-old harbor seal, was plopped into an open-air pool in a Cologne zoo to put his whiskers to the test. Researchers blindfolded and placed headphones on him so that he could only use his whiskers to sense underwater objects. In the pool, the researchers placed a plastic box containing an assortment of variably-shaped paddles. Because they trained Henry to touch his nose to a small plastic sphere whenever he thought a paddle’s ripples were different from a control paddle’s ripples, the scientists were able to test whether the seal could discriminate between different shapes and sizes.

After moving triangular, undulated, cylindrical, and flat paddles in the water, the scientists discovered that Henry could discriminate the flat paddle from the rest over 80 percent of the time. Although he had more trouble discerning the other paddles, he could discriminate between the cylindrical paddle and undulated paddle 60 percent of the time. And he could still detect differences even when the paddles differed in size by a mere 1.4 inches.

The researchers think a seal's sensitive whiskers allows it to identify the best prey even when it's hunting in silty waters. "If a harbor seal can judge the size and shape of nearby fish, it can use this information to decide whether the fish is worth chasing," Hanke told Science. They also think the whiskers help the seals "optimise their hunting behaviour to suit the size and shape of their prey." Next up, they want to dispense with the paddles and test how well he discerns different types of fish.

This isn't the first time Henry the seal has basked in the fame of scientific research: A year ago, Hanke and his team used Henry to find just how sensitive his whiskers were. They discovered that he could track a miniature submarine from 130 feet away. So is Hank some kind of super seal, with especially sensitive whiskers? Scientists suspect not, though that still remains to be seen.