Having your dog in the bed is bad for your sleep. 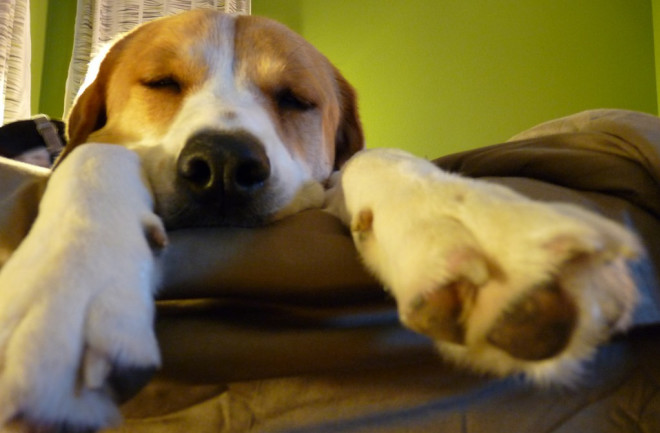 Dog owners, we have some "ruff" news for you: according to this study, it might not be the best idea to let Fido sleep in your bed. These researchers tracked the sleep of 40 humans and their dogs by having them both wear movement tracking devices to bed for a week. They found that the humans slept worse when the dog slept in the bed with them, as opposed to on the floor in the same room, likely due to the dog's movement during sleep. Doggie cosleeper, anyone?

The Effect of Dogs on Human Sleep in the Home Sleep Environment "Objective To objectively assess whether a dog in the bedroom or bed disturbs sleep. Participants and Methods From August 1, 2015, through December 31, 2015, we evaluated the sleep of humans and dogs occupying the same bedroom to determine whether this arrangement was conducive to sleep. The study included 40 healthy adults without sleep disorders and their dogs (no dogs less than 6 months old). Each participant wore an accelerometer and their dog a validated dog accelerometer for 7 nights. Results The mean ± SD age of the participants (88% women) was 44±14 years and body mass index was 25±6. The mean ± SD age of the dogs was 5±3 years and weight was 15±13 kg. Mean ± SD actigraphy data showed 475±101 minutes in bed, 404±99 minutes total sleep time, 81%±7% sleep efficiency, and 71±35 minutes wake time after sleep onset. The dogs' accelerometer activity during the corresponding human sleep period was characterized as mean ± SD minutes at rest, active, and at play of 413±102, 62±43, and 2±4. The dogs had mean ± SD 85%±15% sleep efficiency. Human sleep efficiency was lower if the dog was on the bed as opposed to simply in the room (P=.003). Conclusion Humans with a single dog in their bedroom maintained good sleep efficiency; however, the dog's position on/off the bed made a difference. A dog's presence in the bedroom may not be disruptive to human sleep, as was previously suspected." Related content: Sorry, science says cats simply can’t love you the way dogs can.Shut up and pet me! Dogs prefer petting to vocal praise.The effect of petting a dog on immune system function.