Hatching Sea Turtles Get a Hand from Their Siblings 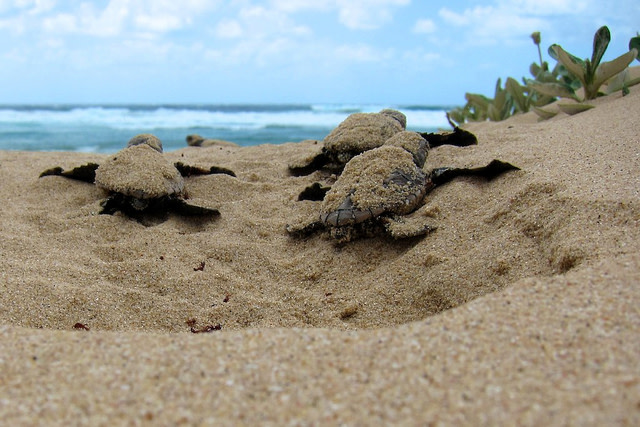 Smashing out of its egg is only the first step in a baby sea turtle's grueling early days. The turtle fights free of its eggshell only to find itself buried underground. It has to intuit which way is up, then dig out of the packed sand. As soon as it breaks onto the surface of the beach, it begins a mad sprint to the ocean. All around are its brothers and sisters, flailing toward the water as fast as their own flippers will carry them. In the sea they'll keep swimming frantically, trying to escape the shallow areas where they're most vulnerable to birds and other predators. A newly hatched turtle can't stop in the middle of this marathon for a PowerBar. All the energy for its journey from underground to ocean has to come from its reserves—the energy it took from its egg while growing. So it's critical for a turtle to reach the ocean as efficiently as possible. Now, through a very tricky series of experiments, scientists have measured how much energy turtles spend while hatching. The more hatchlings are in a nest, they found, the better. Mohd Uzair Rusli, of the Universiti Malaysia Terengganu in Malaysia, explains that our understanding of sea turtle hatching comes from observations made through a glass pane way back in 1959. Those scientists concluded that hatchlings work together to escape. But no one has been able to measure how much teamwork actually helps baby turtles. Rusli and his colleagues in Malaysia and at the University of Queensland in Australia wanted to answer that question. Only a tiny fraction of baby sea turtles are thought to survive to adulthood, so maybe it's fitting that the researchers made several failed attempts before finding an experimental setup that worked. The researchers started with clutches of green turtle eggs collected in Queensland. In the lab, they reburied the eggs in sand inside clear plastic cylinders, so they'd be able to watch the hatchlings dig out. But the first set of eggs seemed to be packed too tightly. The turtles never emerged. When the researchers added more space and started with eggs that were already pipping (starting to crack), they saw hatchlings emerge. But even though they had carefully kept the eggs right side up, some hatchlings came out and dug sideways, instead of straight up toward the surface of the sand. These turtles got stuck against the wall of the cylinder. The scientists concluded that light from the laboratory was confusing the hatchlings. (In nature, turtles usually emerge from their nests at night, and follow light to find the ocean.) So they reluctantly gave up their transparent containers for opaque ones with transparent tops. Now, of course, they couldn't see when the hatchlings started digging. They solved that problem by laying a thin strip of foil across the topmost eggs in the cylinder before piling on the sand. By attaching the foil to a battery and other instruments, they could see when a turtle had broken through the foil and interrupted the circuit. For the final experiment, the researchers dug up more green turtle eggs from a beach in Malaysia. They buried the eggs in their experimental chambers under 40 centimeters of sand. The eggs were buried in 11 groups, ranging in size from 10 to 60 eggs. The researchers waited for the signal that a turtle had emerged from its egg and broken the foil, then timed how long it took the group of siblings to reach the sand's surface. Meanwhile, by controlling the airflow into the chambers and analyzing the air coming back out, the researchers could see how much oxygen the baby turtles were using. This let them calculate how much energy the hatchlings expended. Digging out wasn't a quick affair. Some of the turtle clutches spent nearly eight days getting to the surface. The fastest groups made it out in about three and a half days. But the more turtles were in a nest, the faster they escaped—and the less energy each turtle had to spend during its digging spree. Rusli says they'd expected that by digging together, turtles in larger groups would spend less energy escaping the nest. That's what scientists predicted in the classic experiments. But Rusli didn't expect the energy savings to be so dramatic. The hatchlings in the largest groups spent only about 10 percent of their energy reserves digging out. In the smallest group, turtles had to spend about two-thirds of their energy. While it's nice to know baby turtles give each other a boost, Rusli says the stakes of the research are higher than that. "This study is crucial for sea turtle conservation worldwide," he says. When people dig up sea turtle nests and move them for conservation purposes—say, if there's been an oil spill nearby—they may split a large nest into two smaller ones. But dividing a nest could harm the hatchlings by forcing them to spend more energy digging out. "In short words," Rusli says, "put all eggs in one basket!" 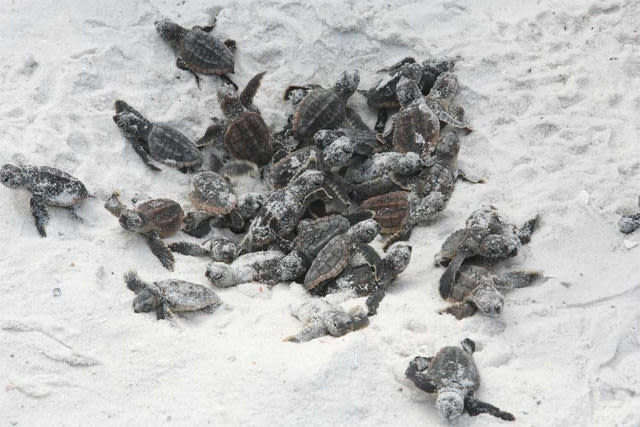 Images: top by Jeroen Looyé; bottom by Bureau of Land Management (both via Flickr)

It’s Wrong to Blame Bats for the Coronavirus Epidemic