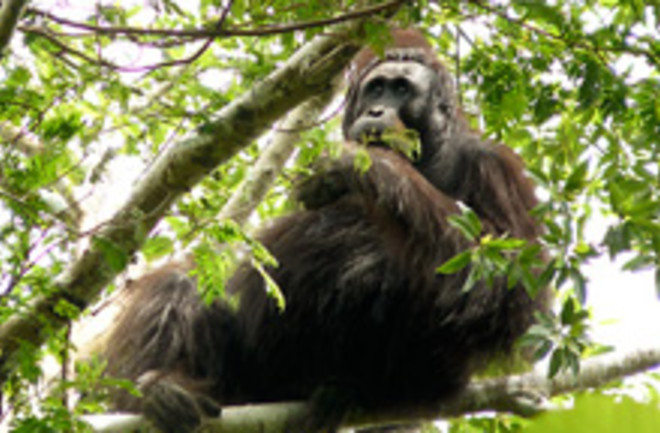 In the remote limestone mountains on the eastern edge of the island of Borneo, a large population of orangutans has been living quite happily, far from human settlements and untouched by the trouble that we humans can bring. Based on a rumor of the primate outpost researchers traveled for days through the mountains, and eventually discovered 219 orangutan nests in the forest, which they say could indicate that as many as 2,000 orangutans live there. With only about 50,000 orangutans remaining in the wild, conservationists say it's a rare piece of good news for the endangered species.

"We rarely have something positive to report in the conservation world. Most of the stories are about declining population or animals dying. It's all pretty negative," said Erik Meijaard, a senior ecologist with the U.S.-based Nature Conservancy. "So to find a substantial population of potentially several hundred to several thousand animals is very exciting" [CNN].

According to the Nature Conservancy, the Indonesian government is now considering turning the area into a protected park. Local researcher Nardiyono says the newly discovered group was surprisingly large, and suggests that the area could be something of a orangutan refugee camp. The region of the rainforest where the orangutans were found

escaped the massive fires that devastated almost all of the surrounding forests in the late 1990s. The blazes were set by plantation owners and small-scale farmers and exacerbated by the El Nino droughts. Nardiyono, who headed The Nature Conservancy's weeklong survey in December, said "it could be the density is very high because after the fires, the orangutans all flocked to one small area" [AP].