Orangutans Are Threatened With Extinction as Habitat Shrinks 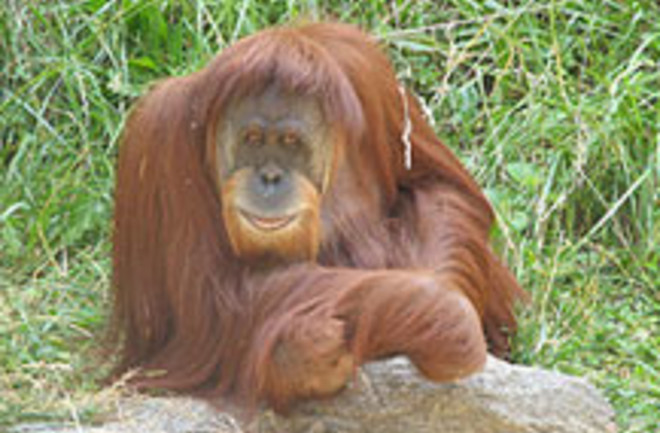 Orangutans, which some scientists believe are second only to humans in intelligence, could be the first great ape to go extinct if swift action isn't taken to conserve their rainforest habitat and protect them from poachers, according to a new survey. The orange-furred primates live in the wild on only two islands, Sumatra and Borneo. The survey, which was conducted by the Great Ape Trust and will be published this month in the journal Oryx [subscription required], alarmed researchers because it showed that orangutan populations have plummeted in just the last few years.

It found that the number of orang-utans on Sumatra island in Indonesia has fallen by 14 per cent since 2004 to only 6,600 animals.... In Malaysia's Borneo island, the largest home of the species, numbers fell by 10 per cent in the same period to 49,600 apes [Telegraph].

The expansion of palm plantation is the primary cause of the dramatic decline, according to the study, although hunting and illegal logging are also to blame [The Christian Science Monitor

]. Palm plantations have become a vital part of the economy in Indonesia and Malaysia, as the palm oil can be used as a biofuel, which is considered a cleaner and more sustainable alternative to petroleum fuels. Although the study's authors are clearly deeply concerned about the orangutan's future, they say there are some hopeful signs of government action.

Indonesian President Susilo Bambang Yudhoyono announced a major initiative to save the nation's orangutans at a U.N. climate conference last year, and [a local] governor declared a moratorium on logging. Coupled with that are expectations that Indonesia will protect millions of acres of forest as part of any U.N. climate pact that will go into effect in 2012. The deal is expected to include measures that will reward tropical countries like Indonesia that halt deforestation [AP].