Within the barbed wire and "Keep Out" signs that ring the Guantanamo Bay naval base, wildlife is thriving. So is scientific work. 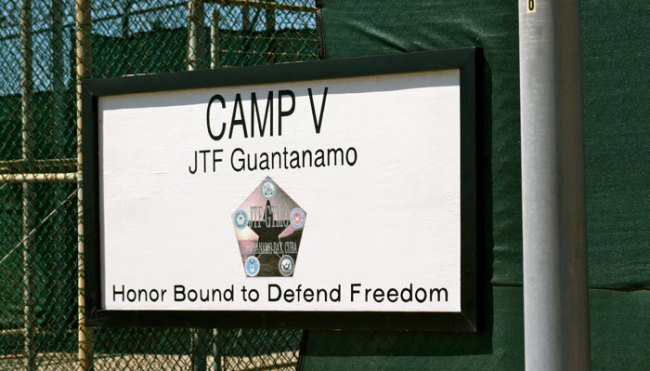 The United States naval base at Guantanamo Bay comprises 45 square miles of Cuban land and water, including the 2.5-mile-wide bay itself. For the military, the base serves multiple functions: It's the logistics center for the Navy's Atlantic fleet, a critical hub in the Navy's counter-drug operations in the Caribbean, and an outpost for U.S. immigration operations. In early 2002, the base became an important--and controversial--focal point in the war in Afghanistan, as detainees were transferred to Guantanamo Bay's newly established detention camp.

But apart from the military mission, the Guantanamo U.S. Naval Base is also quite possibly the best-kept secret among American scientists who work there--from herpetologists to botanists, and marine scientists to entomologists. 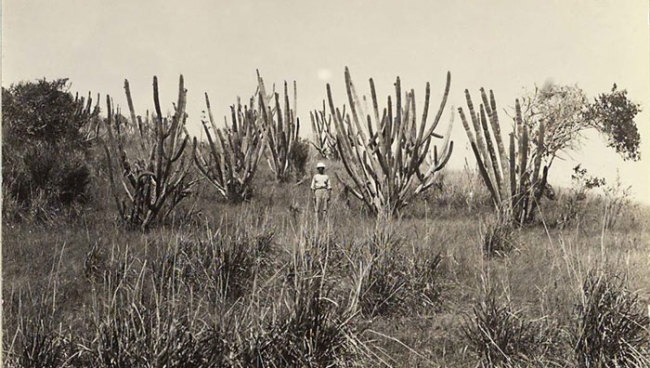 Scientific research began on the base almost immediately after it was founded in 1903. Brian Boom, director of the Caribbean Biodiversity Program at the New York Botanical Garden, says the NYBG has been doing plant studies at the base for just over a century. "The Botanical Garden's founding director, Dr. N.L. Britton, made some important collections there just over a century ago, in 1909," Boom says. In the photo above, Britton is pictured among specimens of the organ pipe cactus (Lemaireocereus hystrix), on a Botanical Garden expedition to the base. "Some of the plant species he found there are today apparently very rare or even extinct outside of the boundaries of the base," Boom adds.

The botanist Alberto Areces, formerly of the NYBG and currently the director of Parque Dona Ines in San Juan, Puerto Rico, agrees. Areces, who was born in Cuba, has studied cacti at Guantanamo. In a published interview, Areces says that he has found the most primitive genus of the cactus family on the base. He has seen species on Guantanamo that he has never seen off the base in "Cuba proper." 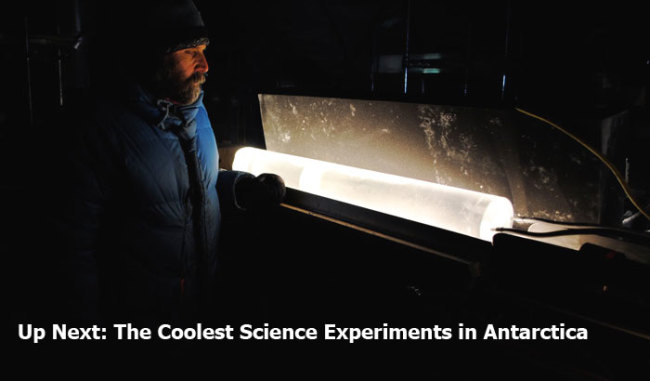 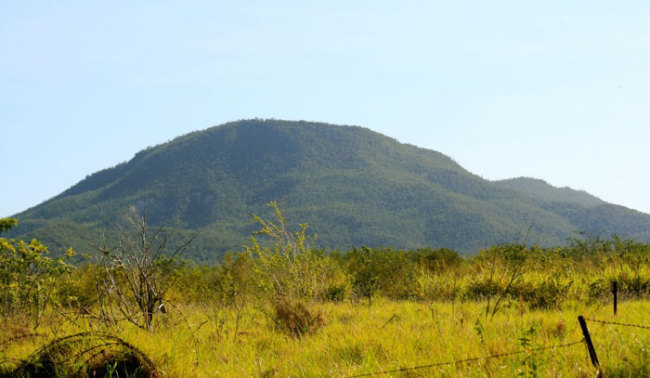 The habitats of Guantanamo Bay are uniquely suited for research. "The base has a lot of acreage of pristine habitat," says Peter Tolson, director of conservation and research at the Toledo Zoo. Tolson, who has been a principal investigator on several projects, has been conducting studies at Guantanamo Bay for a decade. Says Tolson: "When you're up in the Cuzco Hills [pictured here], you'd never be aware a naval base exists here. It's a very easy place to do research. The base is an important refuge." 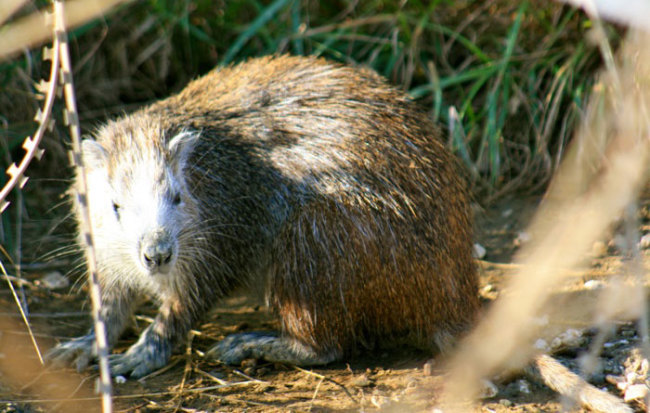 One of Tolson's research projects has involved determining the home range of the Cuban hutia (Capromys pilorides), Cuba's largest native mammal and one of the few native mammals in Cuba that has not been listed as extinct. Tolson says that hutias are eaten in Cuba; thus, they are difficult to study anywhere other than the naval base. 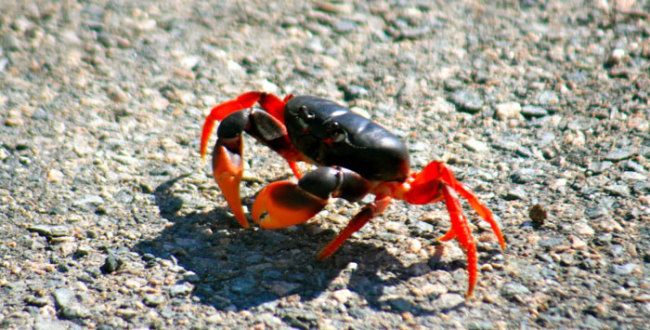 The red land crab (Gecarcinus ruricola) is another species commonly found in large numbers on the base. The work of German researcher Marcus Stensmyr, who has studied land crabs on the Cayman Islands, may inspire more research about Guantanamo's land crabs. Stensmyr and his research team discovered that flies of the species Drosophila endobranchia--which had not been seen since it was discovered in 1966--are actually breeding and living in endemic Caribbean land crabs, who act as willing hosts. Although Stensmyr and his team haven't studied the land crabs at Guantanamo Bay, their findings suggest an avenue for future research at the base. 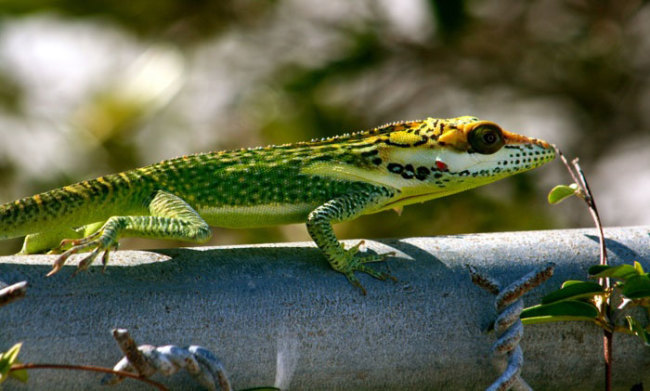 Chuck Kopczak, curator of ecology at the California Science Center, began studying the lizards of Guantanamo Bay in 2009, including the Anolis smallwoodi, pictured above. "Part of our goal," says Kopczak, "is to provide some of the individuals we brought back to zoos or other organizations that would display them and do basic research on their husbandry requirements. Since very little is known about the requirements of keeping A. smallwoodi in captivity and getting them to breed, our "living collections" staff have been working with our animals to develop this knowledge. So far we have had breeding success with all three of the species we brought back from Guantanamo."

Jeff Lemm adds that Guantanamo Naval Base provides a unique opportunity for herpetologists. Lemm, of the San Diego Zoo's Institute for Conservation Research, remarks that the base "is an easy place for U.S. researchers to work on Cuban wildlife. Cuba has so many reptiles and amphibians that we don't typically get to study. The Navy also makes [research] particularly easy in terms of infrastructure," he says. 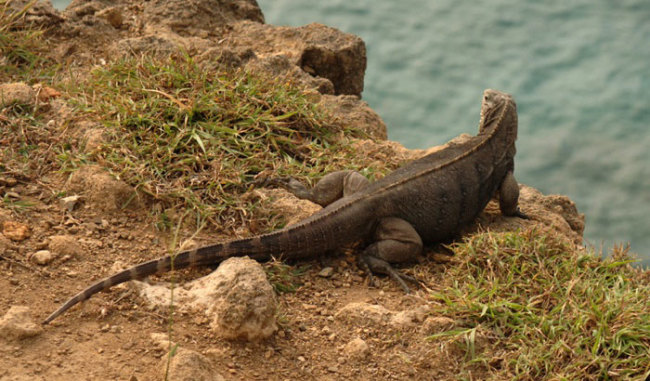 Lemm, who has studied the Cuban iguana at Guantanamo Bay, says that the research done on the base has significant implications for stabilizing reptile populations in the wild throughout the Caribbean. "We learned from the Cuban iguana that head-starting [taking hatchlings, raising them in captivity, then releasing them later when they were less prone to predation by feral cats and other predators] is an effective tool for boosting iguana numbers in the wild. We also learned about their hormones, behavior, social structure, and general overall biology and ecology. Later, we learned about their population numbers [and] preferred habitats. These methodologies are being used all over the Caribbean with excellent results," he says.

Tolson of the Toledo Zoo estimates that 5 to 8 percent of the Cuban iguana population lives on the base, and notes that base regulations protect the iguana, making it an important habitat for the reptile. No such protections exist in the rest of Cuba. 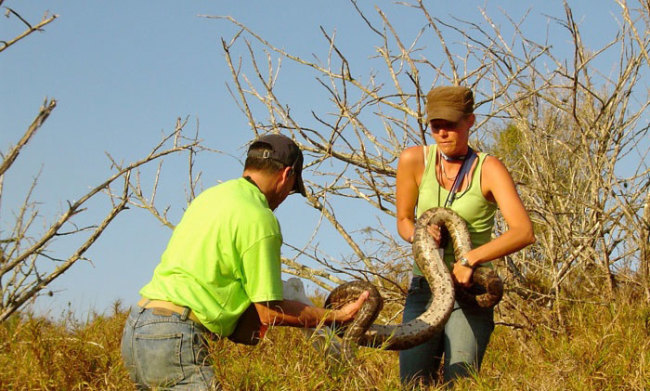 This year, Tolson is initiating his third research project at Guantanamo Bay: a study of the habitat use and home range of the Cuban boa, pictured above with members of Tolson's research team.

Tolson became interested in research possibilities on the naval base even before he was a scientist. "I was in the Marine Corps and Cuba was one of my duty assignments. I was there two years. When I left, I used the GI bill to go to school and I was mentored by a famous scientist who worked in Cuba prior to Castro." Tolson realized that the base's relative isolation offered unique opportunities for researchers. When asked if he's concerned about the base or the detention facility closing (President Obama has tried to close the detention camp), Tolson says, "I'd hate to see the mission diminished, because this is an important refuge for endangered species." 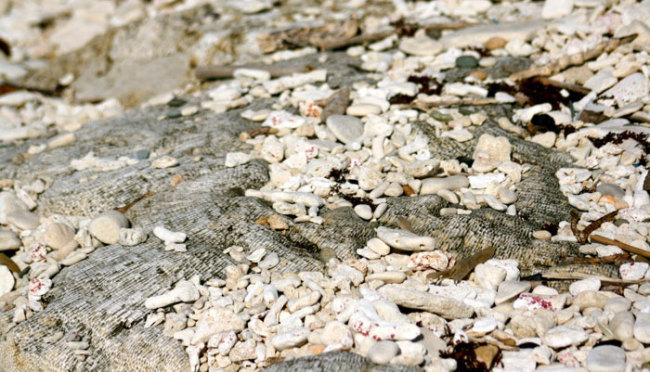 The geography of Guantanamo Bay is remarkably diverse. In addition to the arid hills, where Tolson has studied the hutia, the base is surrounded by water--the bay itself, and the Caribbean Sea. The coral reefs and coastline are considered among the most pristine in the world, says Tolson. Along the base's sandy shores, the herpetologist Lemm has studied Caribbean turtles' nesting habits. Researchers aren't the only ones exploring the base's beaches and waters, though. A tour at Guantanamo Bay is considered hardship duty for servicemembers, who can acquire their scuba "divemaster" certification for free as a benefit of their service. 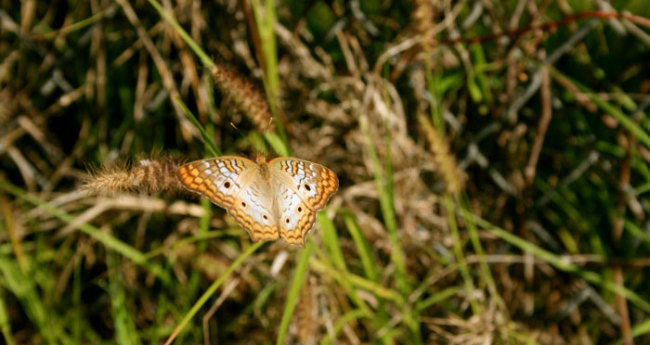 In addition to herpetologists, botanists, and marine scientists, Guantanamo Bay is also beginning to attract entomologists. Sam Droege of the US Geological Survey and Sean Brady of the Smithsonian's National Museum of Natural History study native bee populations on the base. "We were the first entomologists to have ever visited [the naval base for research]," Droege says. Droege, who made his first visit with Brady in May 2010, intends to return this fall. "The Base in not well surveyed for most animal groups and given its location on Cuba, the extent of rare habitat, [and] the number of rare plants, there are bound to be many more discoveries to be made and we are promoting it to other biologists as a research destination," Droege says.

Droege's right: there are many opportunities to study insects on the base. Cuba has more than 170 known species of butterflies, for instance, but to date no butterfly research has been conducted at Guantanamo Bay.