Green Sea Turtles Are Eating Themselves Into the Grave 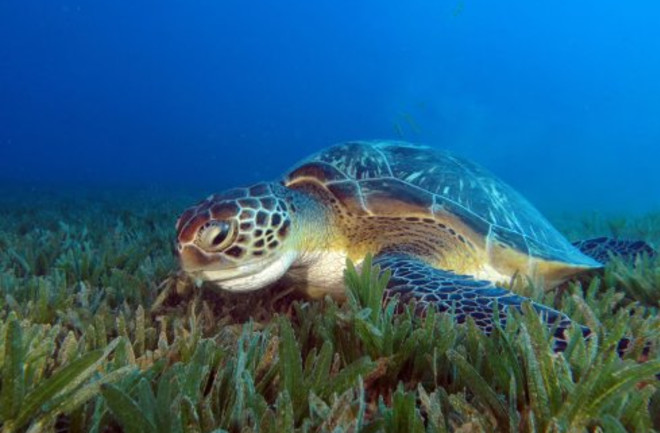 (Credit: Wageningen University) Sea turtles may be eating themselves to death. In this case, though, the phrase likely doesn’t mean what you think it does. Green sea turtles in the Caribbean may be in danger of starving to death in the near future thanks to a recent invasion of seagrass. The marine plant is spreading quickly and edging out native species helped, ironically, by the sea turtles themselves.

Green sea turtles forage in beds of seagrass, an abundant resource in their underwater world. They’ve lived this way in the Caribbean since time immemorial, and it’s worked pretty well for them. Thanks to the recent invasion of a new species of seagrass, Halophila stipulacea, though, the sea turtles are suddenly faced with a crisis. H. stipulacea comes from the Red Sea originally, and it encroached on the Caribbean beginning in 2002. While the plant was already invasive in the Mediterranean, it wasn’t an issue there as it couldn’t outcompete the native grasses. The species endemic to the Caribbean, however, Thalassia testudinum, is being overrun by the invasive grass, and it’s quickly losing ground. That’s where the sea turtles come in. T. testudinum is their main food source, and they eat with gusto, it seems, razing the underwater meadows and moving on to the next when one has been harvested. The meadows normally come back, but the constant feeding leaves them vulnerable to H. stipulacea, which has been taking over in places where the turtles have fed. The sea turtles have been moving into shallower seagrass meadows recently, where they weren’t seen before, and researchers from Wageningen University in the Netherlands say it’s a sign that the turtles are beginning to feel the pinch. The turtles don’t really have an appetite for the invasive grass, and they’re forced to range further afield to find sustenance it takes over. As they do, they denude new areas, allowing the invasive grass to enter new territory and further cement its position in the Caribbean. It’s not necessarily a matter of changing picky sea turtles’ tastes, either. The new grass is 2.5 times less nutritious for the turtles, the researchers say in a paper published in the Journal of Ecology, meaning that it wouldn’t be a good substitute even if the turtles did like to dine on it. Though the turtles have been able to find new meadows to feed on, they can’t run forever. H. stipulacea will catch up to them eventually, and they’ll be forced to eat it, no matter the cost.