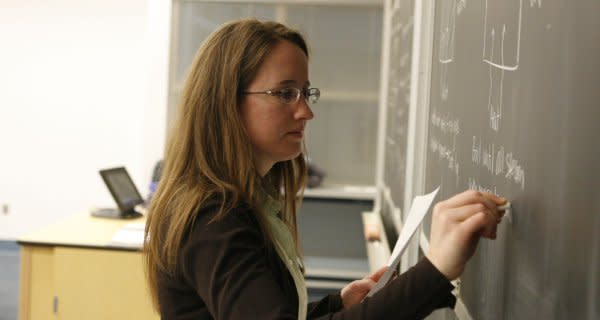 Genetic studies suggest that genes have a big influence on a child’s reading ability. Twins, for example, tend to share similar reading skills regardless of whether they share the same teacher. On the other hand, other studies have found that the quality of teaching that a child receives also has a big impact on their fluency with the written word. How can we make sense of these apparently conflicting results? Which is more important for a child’s ability to read: the genes they inherit from their parents, or the quality of the teaching they receive? According to a new study, the answer, perhaps unsurprisingly, is both. Genes do have a strong effect on a child’s reading ability, but good teaching is vital for helping them to realise that potential. In classes with poor teachers, all the kids suffer regardless of the innate abilities bestowed by their genes. In classes with excellent teachers, the true variation between the children becomes clearer and their genetic differences come to the fore. Only with good teaching do children with the greatest natural abilities reach their true potential. This study demonstrates yet again how tired the “nature versus nurture” debate is. As I wrote about recently in New Scientist, nature and nurture are not conflicting forces, but partners that work together to influence our behaviour. This latest choreography of genes and environment was decoded by Jeanette Taylor from Florida State University. She studied over 800 pairs of Florida twins in the first and second grades. Of the pairs, 280 are identical twins who share 100% of their DNA, and 526 are non-identical twins who share just 50% of their DNA. These twin studies are commonly used to understand the genetic influences of behaviour. If a trait is strongly affected by genes, then the variation in that trait should be less pronounced in the identical twins than the non-identical ones. Florida just happens to collects data on the reading skills of its young children, using a test called the Oral Reading Fluency (ORF) test. The twins’ scores told Taylor how good they were at reading, and the improvement in the scores of their classmates told her how good their teachers were. Crunching the numbers, Taylor found that genes influenced around half of the variation in reading scores (47%), while shared environments (like a common household) accounts for 37% and non-shared environments accounted for 16%. 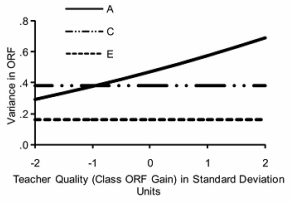 Genes are clearly important, but teaching mattered too. At the highest echelons of teaching quality, genes explained around 70% of the variance in reading scores. At the lowest troughs, they only accounted for around 30%. Taylor confirmed the effect of teaching quality in a couple of different ways. She took a sample of 42 pairs of identical twins and found that those whose reading skills were below average did indeed have poorer teachers than those with above-average skills. She also looked at 216 pairs of identical twins, where each twin had a different teacher. Among these children, the difference in quality between their teachers strongly predicted the difference in their reading abilities. These results are somewhat different to previous genetic studies, which found that around 65% of the variation in children’s reading skills can be explained by genetic factors. These same studies have suggested that outside influences, like family and school, are far less important – the genes are at the wheel, and the environment is in the backseat shouting instructions. But Taylor says that the twins in these earlier studies often came from similar and wealthy backgrounds. If they all get similar educations, that would mask the effect of teaching. So she deliberately set out to recruit twins from a wide variety of ethnic groups and social backgrounds. A third were Hispanic, a third were white, and around a quarter were black. Half of the children came from families that qualified for free lunches on the grounds of low income. There are many caveats to the study, which Taylor herself lists. The reading improvements of a classroom may reflect the school, students or resources, as well as the quality of teaching. You might see different results if you used different measures of teaching quality (like class observations), or of reading skill. The effect of teaching quality might also be different in higher education, or in richer schools. Nonetheless, Taylor’s work does demonstrate that poor teaching constricts genetic variation in reading ability so that it never germinates. Only in the light of quality teaching does that variation bloom. Teachers should be pleased with the result, for, as Taylor says, “Reading will not develop optimally in the absence of effective instruction.” Likewise, putting really good teachers into a classroom won’t magically make all the students into literary Jedis, and (contrary to what some parents expect) it won’t benefit all students equally. I wrote about something similar in my New Scientist piece – a variant of the MAOA gene can lead to aggressive behaviour, but only in people who were raised in abusive environments. Again, the environment sets the stage in which genetic actors can express themselves. Reference: Science 10.1126/science.1186149 Image: by Tostie14More on education: