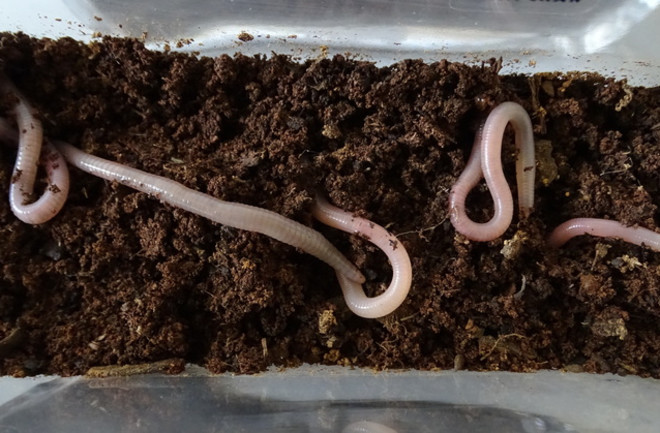 After putting only adult worms into mock Martian soil, two babies were discovered. It's safe to say the worms got down and dirty. (Credit: Wieger Wamelink) Worms can not only survive in faux Martian soil — they can start a new generation. That's the conclusion from biologist Wieger Wamelink who recently discovered two baby worms in his simulated Mars soil experiment. Since 2013, scientists from Wageningen University & Research have been growing crops in Mars and moon soil simulants designed by NASA. They’ve been successful in growing edible crops (including green beans, peas, tomatoes, potatoes, carrots, and more), according to a news release. That's great, but it needs to become a sustainable agricultural ecosystem. And they’re looking to earthworms for help.

Worms: The Way to Successfully Farm on Mars?

Worms play an important role in Earth's soil health. They break down and recycle dead organic matter like old plants, mixing it with the soil. Worms also burrow throughout the soil, aerating it to enhance water and oxygen transport. In a recent experiment, scientists placed adult worms in Martian-like soil that was growing arugula and mixed with pig manure. The different soil simulants contained volcanic rock from Hawaii and desert sand from Arizona to replicate what’s found on Mars and the moon, respectively. “Clearly the manure stimulated growth, especially in the Mars soil simulant, and we saw that the worms were active. However, the best surprise came at the end of the experiment when we found two young worms in the Mars soil simulant,” said Wamelink in a news release. It appears, so far, that the worms are doing quite well in the mock Martian soil. On top of proving worms can live in the simulant soil, the researchers need to see whether they can properly do their job: digest organic matter, mix it with the soil and burrow. Not only does this research help provide potential methods to sustain the colonies Elon Musk plans to have on the Red Planet as early as 2024, but it also has implications for learning why some of Earth's farming practices fail. This is an ongoing study and the final results are yet to be published.