Go Web, Go! Spiders May Use Silk to Sail On Electric Fields 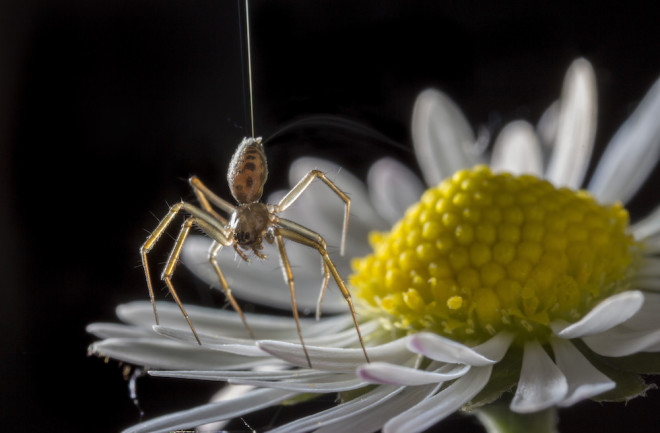 Spiders "tiptoe" to release silk into the air before ballooning away. (Credit: Michael Hutchinson/naturepl.com)Spidey-senses tingling? It’s time to fly. Though those of us without arachnid superpowers might not notice, we are constantly surrounded by electric fields. The ground carries a slight negative charge and the atmosphere is slightly positive, and, as a consequence, negatively charged particles can be borne up into the air. Some kinds of spiders may be taking advantage of the effect to hitch rides on the fields using negatively charged spider silk as an electric buoy to get as high as two and a half miles in the air.Sensory biologist Erica Morley found that Erigone spiders can sense the electric fields that naturally occur in Earth’s atmosphere. They use the information to guide airborne voyages that can go for hundreds of miles, suspended from wisps of silk that act as sails, in a process scientists have playfully dubbed “ballooning.” These spiders join bees as the only arthropods we know of that can detect electric fields in the air. The results are described today in the journal Current Biology. https://media.giphy.com/media/x4bYDENBPJBQ5nNgo6/giphy.mp4

Scientists have puzzled over ballooning spiders since at least the early 1800s, when they proposed two possible explanations for how the arthropods might get airborne. One sensible possibility was that drag forces from wind blowing on the silks could lift the spiders into the air. The other, wackier idea was that the silks were electrically charged and could carry the spiders through the natural electric fields in Earth’s atmosphere.“This is the heyday of electricity in the early 1800s and it was at the forefront of a lot of people’s minds,” says Morley, a sensory biophysics researcher at the University of Bristol. However, it looks like electric spider flight fell to the back of scientists’ minds for a long while. Several studies in the past few decades found that wind could lift spiders, while the electric field hypothesis went untested. But the wind explanation still left some questions unanswered, and in 2013, physicist Peter Gorham published calculations that showed ballooning on atmospheric electric fields was theoretically possible and might complete the picture.This was Morley’s cue. She had been studying electric field detection in bees and vibrational communication in spiders when she saw Gorham’s paper and realized she could actually do the experiments to test whether spiders would respond to electric fields.

She placed spiders in boxes that minimized air movement and shielded them from natural electric fields so she could control the electric fields they were exposed to. When she generated electric fields similar to the natural ones spiders would encounter in the wild, the spiders raised their rears to spin silk into the air. The behavior iscalled tiptoeing, and the spiders only do it when they are about to balloon, a strong suggestion that the spiders use electric fields as a cue to take flight.