Whether it’s the spots on their backs or the slime on their skin, more amphibians glow in the dark than researchers realized. 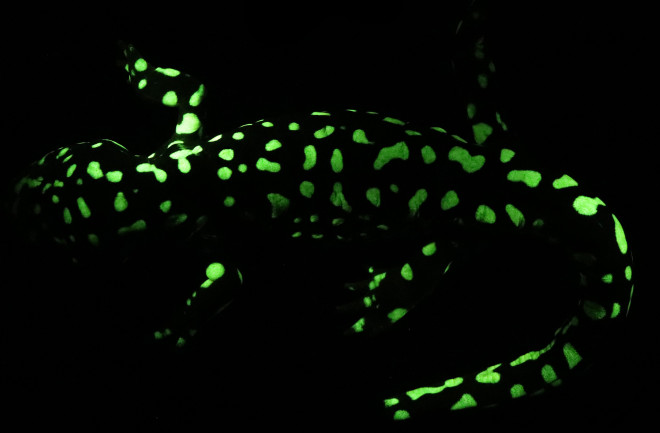 You’d be lucky enough to spot a wild alpine newt in the first place. But if you were to catch a glimpse of the spotted amphibians right at dusk, you might be shocked to see a neon green belly glowing up at you.

Under the right circumstances, alpine newts glow in the dark. So do at least 31 other amphibian species — something researchers didn’t know until a herpetologist and ichthyologist decided to literally shine a special light on them and watched as skin, mucus, bones and more lit up in green and orange.

The new findings, published in the journal Scientific Reports, show that biofluorescence, or the ability to absorb light and reemit it, is more widespread in amphibians than experts previously realized. And it means these organisms see one another in ways we don’t yet fully understand, says study co-author and herpetologist Jennifer Lamb of St. Cloud State University.

“I’ll be careful going forward not to put my own biases of perception on the organisms I study,” she says. “We forget to ask if other species might perceive the world in different ways.”

Searching in the Dark

Biologists knew of just a handful of frogs and salamanders that glow under specific lighting. When, for example, blue or ultraviolet light hits an animal with this particular trait, the light comes back at our eyes in a slightly different wavelength, giving off green, yellow or orange hues. Some fish and sharks do this too, including the ones that co-author Matthew Davis studies.

As colleagues at the same university, Lamb and Davis got to talking about whether anyone had checked to see if other amphibians — including species with which biologists work regularly — also glow. “We forget to ask the same things about species that are common that we’d ask about rarer species,” Lamb says.

So the team brought tiger salamanders — a species Lamb kept coming across while out in the wilds of Minnesota — into the lab. Blue light turned the species’ yellow spots a bright green. And if this salamander went neon, it was only natural to ask what other wetland recluses emit something similar.

Lamb and Davis ended up testing a bunch of salamanders, frogs and caecelians — limbless amphibians — for their responses to blue and ultraviolet light. Some radiated color from their skin. A gray treefrog tadpole glowed from its bones. A few species had fluorescent mucus or urine.

Lamb was particularly fascinated to see that the undersides of some newts were their brightest bits. Colorful markings visible in normal light can indicate to predators that their potential prey is poisonous, and newts can go belly-up to show off their warning sign, Lamb says. If their stomach glows so well in blue light, then maybe that’s something birds or other predators also pick up on.

Glow Your Own Way

Since all kinds of amphibian tissues and body parts glow, it’s possible this trait developed for a variety of reasons, Lamb says. Maybe it’s camouflage, or a way to attract a mate. As for whether they can see each others’ glow, many amphibians do have the ability to see green light. And blue light — which elicited the most vibrant responses — is common at twilight, when many of these species are most active.

It’s possible that amphibians see each others’ glow differently than how humans see it; their eyes might just be different enough to alter their visual perception, Lamb says.

The glowing results that she and Davis found are still exciting to her. Whether it’s finding new species to test for fluorescence, or realizing we’re always so close to learning more about species we thought we understood, she says, it “never gets old.”

Read more: How These Sharks Glow Neon Green to their Friends