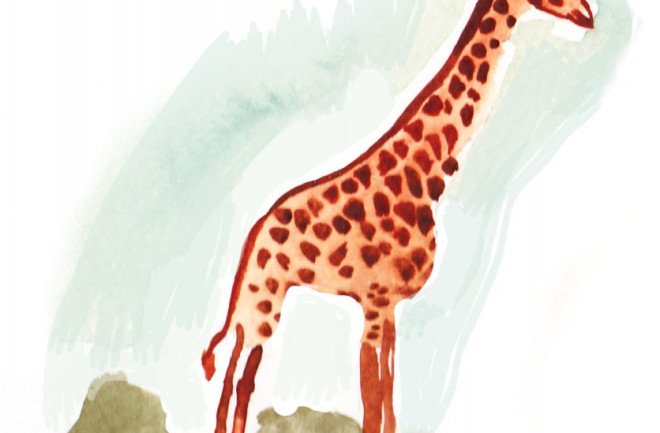 The giraffe is in some ways a perfect symbol for evolution: they eat the leaves of tall trees, and they have the longest necks you can imagine as a result. But how has the rest of their body responded to their massive size?

In a rat, things happen quickly, as you can imagine based on their size. They sense and respond to stimuli with the characteristic jerky little movements we’ve all observed. They embody the types of sensorimotor control (an animal’s ability to take in outside information and respond appropriately) that all animals execute in order to survive, and they’re an efficient little package at doing so.

Bigger animals are less so. Nerves must travel longer distances in bigger animals--for instance, each giraffe sciatic nerve, which runs down each of its legs, is several yards long. If nerve signals in the giraffe go only as fast as those in the rat, giraffes would be expected to be much clumsier.

Thus a group of researchers decided to study whether giraffes have sensorimotor adaptations to their massive size. Could they have a special nervous system setup that somehow fast tracks messages along their very long nerve and muscle fibers?

To find out, the scientists corralled a group of eight giraffes and applied minor electric jolts to their sciatic nerves, assessing how quickly muscles responded to the stimulation.

The results are best explained by going back to the rat: it takes a rat 4.5 milliseconds (thousandths of a second) to respond to stimuli, and those stimuli travel at an impressive 194 feet per second. A giraffe nerve, however, takes 13.4 ms to start its response, and that nerve impulse travels just 165 feet per second. Those two effects combined mean a giraffe can take up to 100 ms to sense and respond to something in the outside world---about half the time that a galloping giraffe’s foot is on the ground! Sounds like a recipe for stumbles.

But perhaps giraffes have a compensatory precision in their movements, so that although it takes longer for them to respond to stimuli, they might do it with more accuracy. To find out if this was the case, the scientists studied how many nerve fibers made up the giraffe sciatic nerve. The more nerve fibers in a given nerve, the more fine-tuned a response to stimuli. Alas, giraffes are built just like us, except longer and bigger. No more nerve fibers than your average rat.

Thus, giraffes are apparently neither precise nor quick on the draw, but still manage to outrun lions and not fall over. Future research will have to investigate whether giraffes are capable of perhaps predicting their environment and body state to get a leg up on response times. Just, not more than one leg up at a time please---that sounds dangerous.