Pithovirus was found dormant in the Siberian permafrost. Well, before scientists melted it free. 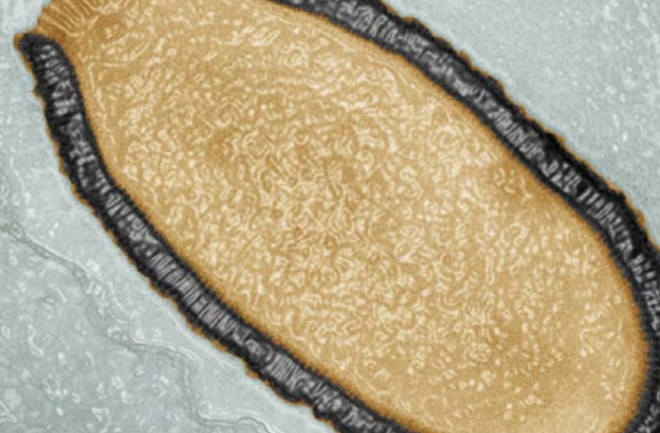 Scientists in France have awoken a gigantic, ancient virus from its 30,000-year-long slumber in Siberian permafrost — and found that it's ready to infect again. There’s no need to scour eBay for a HAZMAT suit: the virus, dubbed Pithovirus sibericum, only infects single-celled amoebas. However, the discovery has scientists wondering what other microbes are hidden in melting permafrost awaiting another chance to infect.

“The revival of such an ancestral amoeba-infecting virus … suggests that the thawing of permafrost either from global warming or industrial exploitation of circumpolar regions might not be exempt from future threats to human or animal health,” scientists wrote in the Proceedings of the National Academy of Sciences.

Evolutionary biologists Jean-Michel Claverie and Chantal Abergel discovered Pithovirus sibericum under 100 feet of coastal tundra in the far northeast of Russia. Their search was inspired by the earlier discovery that a 30,000-year-old plant could be resurrected from fruits buried in permafrost.

Wondering if a microbe could perform the same feat, Claverie and Abergel started hunting for ancient viruses in thawed permafrost samples, using amoebas as bait. When the amoebae started dying, they found the Pithovirus inside them. Pithovirus is the oldest virus to ever awaken from dormancy and remain infectious. It measures 1.5 micrometers long, about the size of a bacterium, making it the largest in a class of giant viruses that was discovered 10 years ago.

If a 30,000-year-old virus can maintain its infectious abilities, Clevarie wonders if other microbes are capable of revisiting humanity in devastating fashion. He told the BBC:

"If it is true that these viruses survive in the same way those amoeba viruses survive, then smallpox is not eradicated from the planet — only the surface. By going deeper we may reactivate the possibility that smallpox could become again a disease of humans in modern times."

However, University of British Columbia virologist Curtis Suttle, not involved with the study, said we shouldn’t hit the panic button yet, since thousands of viruses enter the human body each day by simply breathing. He told Nature it “stretches scientific rationality to the breaking point” to think melting ice would hold enough microbes to affect humanity’s health on a large scale.