Giant squid, what big eyes you have. All the better to spot sperm whales with, my dear. 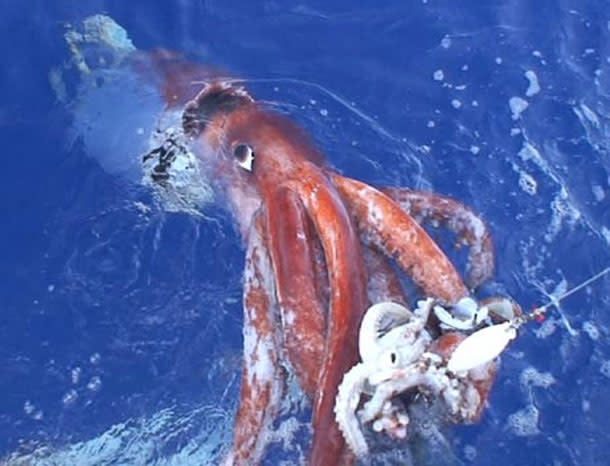 The giant squid sees the world with eyes the size of soccer balls. They’re at least 25 centimetres (10 inches) across, making them the largest eyes on the planet. For comparison, the largest fish eye is the 9-centimetre orb of the swordfish. It would fit inside the giant squid’s pupil! Even the blue whale – the largest animal that has ever existed – has measly 11-centimetre-wide eyes. So why the huge leap in size? Why does the giant squid have a champion eye that’s at least twice the size of the runner-up? Dan-Eric Nilsson and Eric Warrant from Lund University, Sweden, think that the squid must have evolved its eye to cope with some unique challenge that other animals don’t face. They suggest that the world’s biggest eyes evolved to spot one of the world’s biggest predators – the sperm whale. It’s generally true that bigger eyes can see more light. You’d expect that a big-eyed squid should be able to see further than a small-eyed one, which would be useful for finding mates or prey. But Nilsson and Warrant showed that this intuitive explanation can’t account for the squid’s extreme eye. Using a mathematical model, they found that in the deep ocean, eyes suffer from a law of diminishing returns. Small eyes can see dramatically further if they grow a bit bigger. But once the pupil passes 2.5 centimetres, these improvements become tinier and tinier. Once the pupil reaches 3.5 centimetres, and the eye itself reaches 9 centimetres, there’s very little point in making it any bigger. And that’s exactly where fish have stopped. Even though the swordfish’s head is capable of holding a much larger eye, it doesn’t. The giant squid weighs about the same as a swordfish, but its eye is around three times bigger. Why? Using their model, Nilsson and Warrant found that enormous eyes have advantages over eyes that are merely large. Specifically, they’re much better at spotting other large objects that give off their own light, in water deeper than 500 metres. There’s one animal that fits those criteria, and it’s one that giant squids really need to see: the sperm whale. We know that sperm whales eat the giant squid and its even larger cousin, the colossal squid. The sharp beaks of both species have been found in sperm whale stomachs, and the whales often bear the marks of their battles in their skin – ring-shaped scars caused by the serrated ‘teeth’ on the squids’ suckers. Hold on – whales don’t glow. In the dark oceans, how could the squids see them? Nilsson and Warrant note that while sperm whales don’t produce their own light, they frequently disturb animals that do. When they dive, they knock tiny animals like jellyfish and crustaceans that flash in response. These shimmering outlines would be too faint for most animals to see, but not the giant squid. Nilsson and Warrant showed that its huge eyes could pick up this light from 120 metres away, and they can scan a huge sphere of water for those tell-tale flashes. Sperm whales have a long-range detector too – sonar. They produce extremely loud clicks, and time the rebounding echoes to map the water around them. Their sonar has a range of a few hundred metres, so it should always spot a giant squid before the squid sees it coming. Still, the squid’s eye would give it enough warning to allow it to flee. Nilsson says, “Squid are generally good at fast bursts, and the few observations that have been done on live giant squid show that they are powerful animals.“ They also have large bodies, which could help them to escape at speed. Perhaps the threat of sperm whales pushed the evolution of both the giant squid’s eyes and its body. This arms race between giant predators and giant-eyed prey may have played out once before. During the reign of the dinosaurs, reptiles called ichthyosaurs swam in the seas. They looked a bit like dolphins, but they also had massive eyes – similar in size to those of the giant squid. There were no sperm whales around in those days, but there were othermassive predators like Kronosaurus and Rhomaleosaurus. Maybe the ichthyosaurs used their large eyes to avoid these giant hunters, just as giant squids use theirs to avoid sperm whales. For now, Nilsson and Warrant bill their idea as a hypothesis, albeit one with a solid foundation. “To confirm or disprove our theory it would be necessary to make direct observations on how giant and colossal squid evade hunting sperm whales,” says Nilsson. “But because this takes place in the darkness at depths of 600-1000 metres in the sea, such observations are extremely difficult.”

Very few people have successfully measured the eye of a giant squid. In the few successful attempts, the eyes belonged to dead animals and were distorted. Thankfully, Nilsson and Warrant managed to get a photo of a freshly caught giant squid, captured by a Hawaiian fisherman in 1981. There’s a standard fuel hose running over the eye, and the duo used this to gauge its size – it was at least 27 centimetres wide. They also got access to a colossal squid – the largest one ever caught – which had been frozen in New Zealand’s Te Papa Museum. Its eye was the same size – 27 to 28 centimetres. There are some larger estimates of 40 centimetres or so, but the duo think that these are overblown. Reference: Nilsson, Warrant, Johnsen, Hanlon & Shashar. 2012. A Unique Advantage for Giant Eyes in Giant Squid. Current Biology http://dx.doi.org/10.1016/j.cub.2012.02.031Photo: squid by National Geographic, eye by Ernie Choy 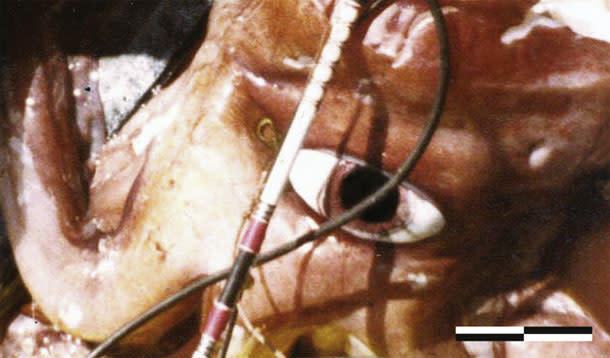 A note on sizes: