The cloud, which has traveled more than 4,000 miles and triggered health alerts in the Caribbean, will reach the U.S. early Wednesday. 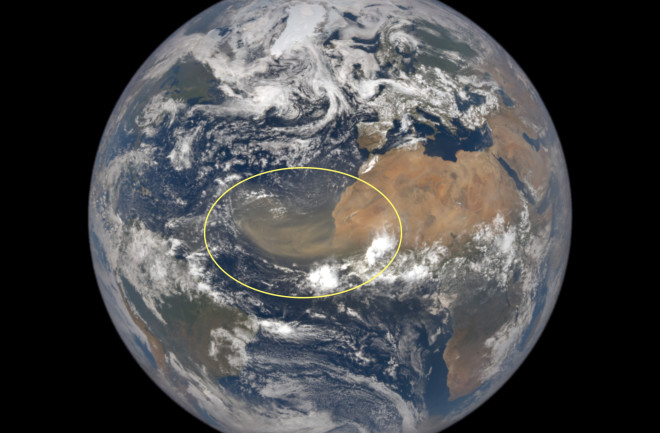 The Deep Space Climate Observatory spacecraft captured this image of a giant Saharan dust cloud, circled in yellow, as it was blowing west across the Atlantic Ocean on June 18, 2020. DISCOVR orbits about a million miles from Earth. (Credit: NASA)

A colossal cloud of dust that rose up over the Sahara Desert in mid-June has been swept more than 4,000 miles across the Atlantic Ocean and now threatens to bring haze and health impacts to the U.S.

The cloud is so prominent that it is easily seen in images of Earth acquired by the Deep Space Climate Observatory spacecraft orbiting a million miles away.

Strong updrafts in the atmosphere above the Sahara lofted huge amounts of dust on or around June 13, 2020. The cloud was then picked up by the prevailing winds and blown west out over the Atlantic Ocean, eventually reaching the Caribbean.

“Normally, hundreds of millions of tons of dust are picked up from the deserts of Africa and blown across the Atlantic Ocean each year,” according to NASA. “That dust helps build beaches in the Caribbean and fertilizes soils in the Amazon. It can also affect air quality in North and South America.”

The leading edge of the cloud reached islands in the eastern Caribbean several days ago. Yesterday, a video posted to Twitter showed thick brown haze from the dust casting a pall over Barbados. Another video showed the cloud enveloping San Juan, Puerto Rico.

As the cloud drifted over Puerto Rico and a large swath of the Caribbean, the GOES-16 weather satellite tracked it:

The animation (which repeats three times) consists of images acquired by the satellite on June 22, 2020. Evidence of the sand-colored dust can be seen as far west as Central America.

The cloud is headed for landfall in Texas and Louisiana starting early Wednesday morning, June 24.

The forecast for the evolution of the Saharan dust cloud. (Credit: NASA Global Modeling and Assimilation Office)

The highest concentrations of dust are likely to arrive by Friday afternoon. This should bring beautiful sunsets — but also potentially serious health impacts.

“People with underlying health conditions like asthma, chronic bronchitis and emphysema or COPD should enjoy the enhanced sunset views from indoors with filtered air, or while wearing a protective mask if outdoors,” said Charles Preston, the coroner of St. Tammany Parish in Louisiana, as quoted in a Nola.com story. “Like the flower of foxglove, which contains digitalis, these sunsets can be beautiful but deadly.”

An astronaut aboard the International Space Station took this photo of the Saharan dust cloud over the Atlantic Ocean on June 21, 2020. (Credit: NASA)

Dust clouds like this are not at all unusual — although this one seems to be particularly intense. They arise as a result of a phenomenon known as the “Saharan Air Layer.”

SAL is a mass of very dry, dusty air that forms over the Sahara Desert, usually starting in mid-June — just as this one did. The layer of dusty air usually is about 2 to 2.5 miles thick, with a base at about 1 mile above the surface.

“The warmth, dryness and strong winds associated with the Saharan Air Layer have been shown to suppress tropical cyclone formation and intensification,” according to the National Oceanic and Atmospheric Administration. The activity usually peaks from late June to mid-August, and then subsides after mid-August.

As Saharan dust blew over the Cape Verde islands on June 18, 2020, vortex patterns appeared downstream, as seen in this image acquired by the Sentinel 3 satellite. (Credit: Copernicus Sentinel data processed by Tom Yulsman with the Sentinel Hub EO Browser)

Dust from Saharan Air Layer outbreaks blowing over islands in the Atlantic can create striking patterns downstream. These long chains of spiral eddies are known as “von Kármán vortices,” named after Theodore von Kármán, a Hungarian-American physicist who was the first to describe how they form.

As winds blow across a feature like an island rising from the ocean, the airflow tends to divert around it in an alternating direction of rotation. The resulting swirling pattern is often seen in clouds downstream. In this case, it’s in the dust being swept westward by the winds.