When the Chicxulub impact blasted into the Yucatan Peninsula, it generated massive tsunamis that left their signature thousands of miles away. 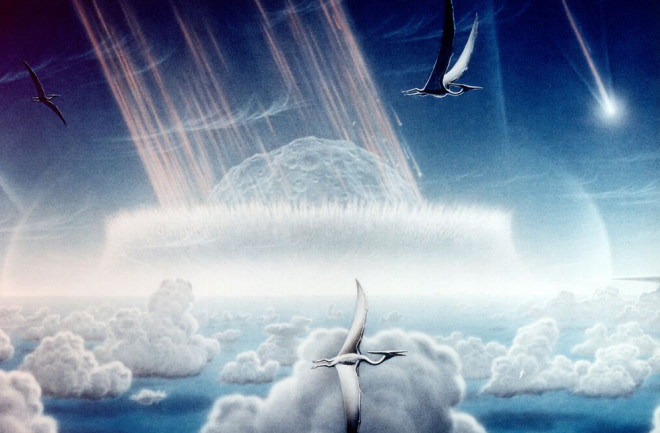 Over 800 miles from the impact site, massive ripples buried deep underground record the devastation wrought by an asteroid. The Chicxulub impact, the likely smoking gun for the extinction of the dinosaurs at the end of the Cretaceous, sent tsunamis tearing across the Gulf of Mexico. These giant waves left ripples in the undersea sediments as they passed and a new study has found what might be the largest "megaripples" on the planet.

Let's step back a moment. It has been around 40 years since the Chicxulub impact, located on the northern shores of the Yucatan Peninsula, was identified as the potential cause of the famed Cretaceous-Tertiary extinction (a.k.a., the K-t boundary). Since then, signs of this massive collision have been found across the planet. These include a layer of iridium from the asteroid, droplets of molten rock that rained down after the impact, wave deposits as far away as North Dakota and the charred remains of forest burned by the heat of the blast.

And we're still discovering the results of that bleak day 66 million years ago. A new study in Earth and Planetary Science Letters by Gary Kinsland and others may have revealed the deposits left by the massive tsunamis created by the impact. When the asteroid, thought to have been 6 miles across, blasted into the shallow proto-Gulf of Mexico, it unleashed waves that raced across the sea.

At that time, the coastline along the north of the gulf was much further north thanks to high sea levels, so the modern state of Louisiana was under a hundred or so feet of sea water. The tsunamis that sloshed across the gulf carried sediment and deposited it in the form of massive ripples across what is now dry land in central Louisiana.

Seismic image of the buried megaripples in central Louisiana. Credit: Kinsland and others, EPSL (2021)

These megaripples are the first to be identified from the Chicxulub impact. Now, these ripples are, on one hand, much like you might see on a beach. On the other hand, they were huge. The average height of the ripples is 50 feet and their wavelength is over a third of a mile. The megaripples were so well preserved because the sea was deep enough that later storms didn't disturb the features.

These megaripples aren't visible at the Earth's surface today. They've been buried by later sediments but they show up in seismic data that has been collected over the decades by petroleum companies. Seismic data like these show changes in the layers of rock and sediment based on their characteristics like composition and density by using how the speed of seismic waves change as they pass by. Think of it somewhat like sonar for underground.

There is a vast trove of geophysical data about our planet locked away in propertiary data sets like these (and one can hope it can see the light of day when we move away from fossil fuels). Until then, these Louisiana megaripples are a tantalizing clue into what it might have been like for days after the Chicxulub impact, where massive tsunamis rolls back and forth across the Gulf of Mexico.