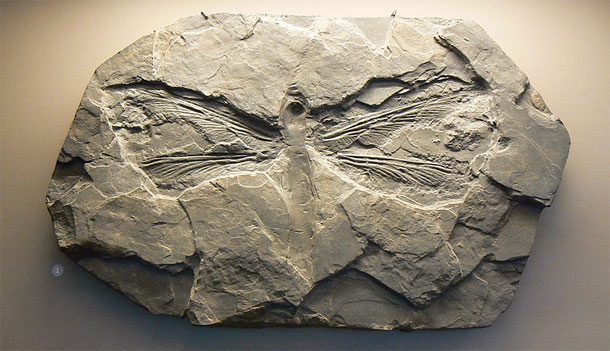 The largest wings of any living insect belong to the Queen Alexandra birdwing butterfly and the atlas moth. They can span 10 to 12 inches across. But even these giants are puny compared to the insects of prehistory. Meganeura, for example, was a dragonfly that lived 300 million years ago and each of its wings was the length of my arm. Why do such behemoths no longer exist? The prevailing theory, proposed around a century ago, is that the Earth’s atmosphere used to have much more oxygen—more than 30 per cent in the Permian, compared to just 20 today. This vital gas sets an upper limit on how big animals can be. The seething quantities of past eras allowed flying insects to fuel faster metabolisms and larger bodies. Matthew Clapham and Jered Karr from the University of California, Santa Cruz have now found some strong evidence to support this idea, after analysing more than 10,500 fossilised insect wings. It took almost 18 months to collect the entire data set, but it clearly showed that the maximum wingspans of flying insects neatly tracked the oxygen in the atmosphere for their first 150 million years of evolution. As the gas reached its peak during the Permian, the insects were at their largest. As levels later fell, the insects shrank. But this neat correlation stopped between 130 and 140 million years ago, during the early Cretaceous period. Even though oxygen concentrations started climbing from a Jurassic low of 15 per cent, for the first time in their history, the insects didn’t follow suit. If anything, they got smaller. They had finally encountered something that limited their growth more than the oxygen in the air: birds. During the preceding Jurassic period, small dinosaurs had started to evolve feathers. By the early Cretaceous, the rise of feathered flying dinosaurs –birds—was truly underway. They had also started to evolve features like the alula – a small thumb-like projection at the front of the wing that allows them to manoeuvre at low speeds without crashing. Smaller insects would still have been too fast and manoeuvrable for them, but larger ones would have been easier prey. Clapham and Karr think that birds exerted a “size-selective pressure” on the insects. By killing the largest individuals, they gave the smallest ones had an advantage, and kept the group as a whole from getting bigger. “There aren't a lot of other major environmental or biological events in the Early Cretaceous, so no other factors really jump out as being a possibility,” says Clapham. “Flowering plants evolved around then—a little later, but close—but it's difficult to see why they would have affected these large, predatory insects.” Clapham and Karr also found that the pterosaurs – flying reptiles that lived at the same time as the dinosaurs –didn’t have the same effect. There might be a boring reason for this. “In the Late Triassic, pterosaurs evolve about 20 million years before oxygen drops to its Jurassic low, but there are unfortunately very few insect fossils in that time interval,” says Clapham. “We just can't tell whether their size decrease then was caused by pterosaurs or the reduction in oxygen.” However, the Jurassic insects were as big as you would expect given the levels of oxygen at the time. This suggests that if the pterosaurs had an effect, it was a small one. Clapham thinks that they just weren’t as manoeuvrable as birds later were. “I don't think they would have been as effective aerial predators,” he says. Reference: Clapham & Karr. 2012. Environmental and biotic controls on the evolutionary history of insect body size. PNAS http://dx.doi.org/10.1073/pnas.1204026109Image by HcrepinRelated posts: