The Giant Geode of Pulpi is 25 Feet Long. Now Scientists Know How it Formed 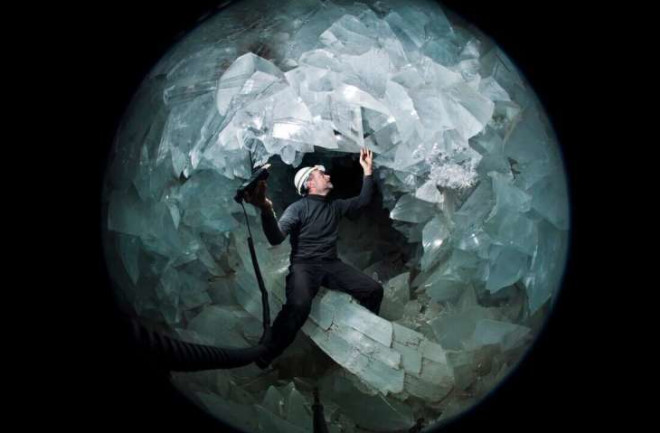 From one end to another, this giant geode is about as long as a small RV. If you wanted, you could comfortably house several adults within its dazzling interior. And the crystalline slabs that jut from its walls may even be taller than you are.

However you slice it, the geode of Pulpí is absolutely gigantic. The interior of the egg-shaped cavity — which measures 25 feet long, 7 feet wide and about 5 feet tall — is encrusted with shimmering crystals. These crystals, made of a mineral called gypsum, are so transparent that they resemble massive spears of ice. Some of them are more than 6 feet in size.

So how, exactly, did this great geode come to be? In a paper published in the journal Geology last week, a team of researchers dug into the geological forces that shaped the Pulpí geode.

Scientists explore the mine where the geode is located. (Credit: Hector Garrido)

In recent years, other formations of giant, gypsum crystals have been found across the globe. One of the most striking is a crystal cave in Naica, Mexico, that looks like the fictional “Fortress of Solitude” where Superman hangs his cape. It contains some of the largest natural crystals ever discovered.

But scientists say that unearthing the mystery of how the Pulpí crystals were formed posed its own set of challenges. Because they were shaped by incremental crystal growth over thousands of years, recreating those circumstances in a laboratory isn’t an option.

“To reveal their formation has been a very tough task,” study author Juan Manuel García-Ruiz said in a press release. “Unlike in the case of Naica, where the hydrothermal system is still active, the large geode of Pulpí is a fossilized environment.”

The Pulpí geode was discovered in 1999 within an abandoned mine in southeast Spain. To trace its origins, the research team conducted a study of the geology and geochemistry of the mine, including a detailed mapping of the underground mining facility.

In nature, crystals form when liquids cool and start to harden. The researchers discovered that the crystals of Pulpí formed at around 68 degrees Fahrenheit (20 degrees Celsius), just below the surface, where fluctuations in temperature could still be felt. These shifts caused the gypsum minerals to dissolve and recrystallize over time.

The team also acknowledged that, due to their purity, the crystals comprising the geode can’t be precisely dated. Still, it is possible to indirectly deduce the Pulpí geode’s approximate age.

“They are most probably younger than 2 million years, but older than 60,000 years, because this is the age of the carbonate crust coating one of the large gypsum crystals,” said Garcia-Ruiz.