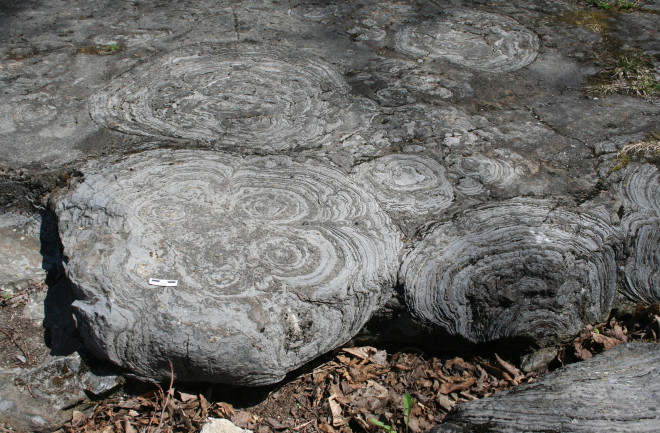 Fossilized stromatolites near Saratoga Springs, NY. The structures they form are very close to modern-day bioherms. (Credit: Michael C. Rygel/Wikimedia Commons) The world's largest reef system has even more coral than we thought. Researchers at Australia's Great Barrier Reef say that they have discovered giant mounds of previously undiscovered coral dotting the Australian seabed, interspersed with the existing reef system. Some of these mounds are nearly one thousand feet across and 30 feet high, and have built up over the past ten thousand years or so.

On the Shoulders of Ancestors

They are called bioherms, and form gradually over time as corals grow, die and calcify. Successive generations of corals simply build on top of their calcified ancestors, creating a huge circular bed on the ocean floor. These bioherms are made from Halimeda, a common species of green algae. The coral hills form between reefs, usually on the westward side where currents filter through the reefs to bring nutrients to the algae.

Northwesterly view of the Bligh Reef area off Cape York. Depths are colored red (shallow) to blue (deep), over a depth range of about 50 meters. Bathymetry data from Australian Hydrographic Service. Researchers knew that bioherms were present in the Great Barrier Reef system, but this latest study reveals that they extend much further than previously thought. Using LiDAR data from the Australian navy, researchers from James Cook University, the University of Sydney and the Queensland University of Technology say the bioherms extend for some 4,000 square miles along the coast. They published their research last week in the journal Coral Reefs. Cores from similar bioherms indicate that they have been growing for roughly 10,000 years, piling up on top of each other to reach incrementally for the surface. Bioherms are also an important, although poorly understood, carbon sink. The calcification process combines calcium and carbon dioxide to create limestone, sucking carbon from the ocean and entombing it in bioherms. The effects of climate change and warming oceans on bioherms are not well known either. Acidifying oceans could impact their livelihood similarly to how other corals are being killed off. Those questions, along with the role that bioherms play in the larger reef ecology, still await answers.