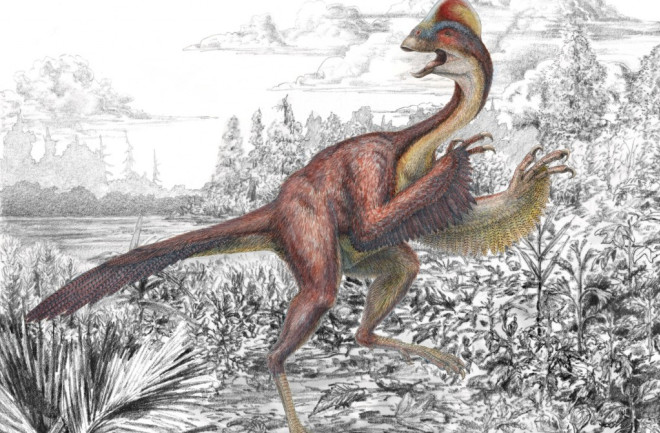 The big, bad, beaked stuff of nightmares, new dinosaur Anzu wyliei is described as "hell's chicken" by the researchers who found it. Credit: Mark A. Klingler, Carnegie Museum of Natural History. Researchers announcing a newly described dinosaur called it the "chicken from hell," "hell's chicken" and "scary as well as absurd." More prosaically known as Anzu wyliei, the beaked dinosaur stood about ten feet tall and more than 11 feet long with a tall crest on its head and sharp claws. A. wyliei lived about 66 million years ago in what's now North and South Dakota, possibly sharing the same habitat as the iconic Tyrannosaurus rex and Triceratops species. Researchers announced the new species this week.

Despite its vicious-looking claws, A. wyliei likely ate vegetation, small animals and possibly the eggs of other species. It lived on a floodplain and, while flightless, had a bird-like appearance with slender legs and a toothless jaw. Although no fossilized evidence of feathers were found, based on its relationship with other feathered species, researchers believe the animal had feathers on its tail and arms.

Aside from getting to put the phrase "chicken from hell" in a press release, researchers who described the new dinosaur today in the open-access journal PLoS One have good reason to be excited about the find. Their analysis is based on partial remains of three separate individuals found in the Hell's Creek formation; together, the fossils form an almost complete A. wyliei skeleton. That's important because the dinosaur belongs to the Caenagnathidae family, a mysterious offshoot of the oviraptorosauria subgroup previously known only from a handful of fragmentary bones. Having a nearly-complete example of a Caenaghathid not only fills in a blank in the fossil record, it's also rewriting the oviraptor family tree. Already A. wyliei's remains have settled a debate about the relationship between different oviraptors species: "hell's chicken" has shown North American oviraptors are much more closely related to each other than to similar species in Asia. At the same time, researchers believe an Asian oviraptor, the 26-foot-long Gigantoraptor, should be reclassified as a Caenaghathid based on similarities its shares with A. wyliei.