Getting Inside The Head Of Homo Naledi 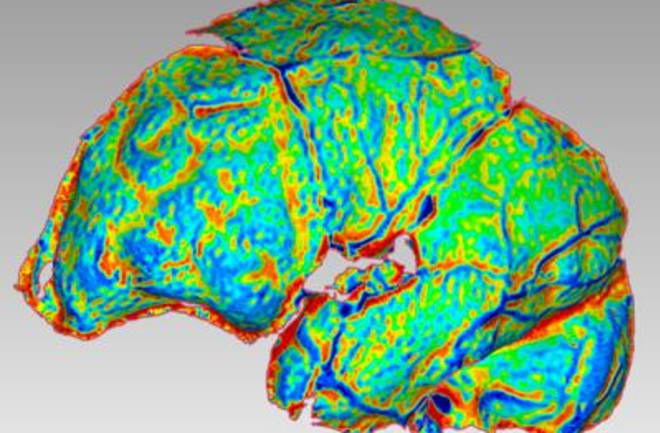 Curvature map of a Homo naledi cranial endocast. (Credit PNAS) Maybe size doesn't matter that much after all. Ever since its discovery in 2013, Homo naledi — the newest addition to our family tree — has been a source of speculation and surprise. The South African hominin's latest mind-bending revelation: Its brain, though notably small, had several structural details similar to those of bigger-brained members of the genus Homo, including us. The new research hints that these structures developed early in the story of Homo, and may have permitted more advanced cognitive functions despite H. naledi's overall smaller brain volume. Homo naledi has presented paleoanthropologists with many intriguing riddles thanks to its unique blend of anatomical traits from both the early and late hominin fossil record. But when Homo naledi's discovery went public in 2015, much of the attention focused on the disparity between its low brain volume and apparently sophisticated behavior. Specifically, paleoanthropologist Lee Berger and colleagues interpreted the location of the find (at least 15 individuals in a cave chamber that was extremely difficult to access) as intentional deposition of bodies post-mortem. That's a fancy way of saying the team believed Homo naledi buried (or at least intentionally placed) its dead, implying a cognitive capacity for symbolism and ritual behavior. The hypothesis caused a stir because most of the field believed only modern humans and Neanderthals were capable of thinking up that kind of behavior. In 2017, research into the age of the Homo naledi fossils stirred up a new hullabaloo: The hominin lived in South Africa only a couple hundred thousand years ago, so it likely overlapped with early Homo sapiens in both territory and timeframe. The relatively young age of the fossils presented a new puzzle. Perhaps Homo naledi was some kind of primitive, small-brained relic that somehow managed to survive into the age of modern, big-brained, "superior" humans. Or maybe it was an unexpected offshoot, not unlike the diminutive Homo floresiensis of Indonesia, that back-pedaled, evolutionarily speaking, to more primitive traits as it diverged from the rest of the hominin family tree. Head Case Today, announcing the results of new modeling of Homo naledi's brain, researchers revise not only our understanding of the curious hominin, but also the notion that bigger is always better when it comes to brains. The team created endocasts, impressions of the interior of the cranium, from the partial skulls of several individuals from the original Homo naledi find in Dinaledi Chamber, part of the Rising Star cave system near Johannesburg. (A second Homo naledisite, announced in 2017 and including the most complete individual yet discovered, was not part of the study.) Among the partial skulls included in the new research: DH1, which serves as the Homo naledi holotype, the individual upon which researchers base their initial formal description of the species.

The partial skull of Homo naledi individual DH1, the holotype of the species, was included in the study. (Credit Berger et al 2015, https://doi.org/10.7554/eLife.09560.019) Endocasts, it should be noted, are not perfect molds of the brain, particularly when dealing with partial skulls. Even in the best conditions, endocasts are an approximation of the brain's structures, which in life were separated from the skull itself by several layers of tissue. That said, researchers have enough of them from the fossil hominin record, and from other primates, to be able to make some general comparisons. And that's where things get exciting. Speaking Volumes When it comes to brain volume, previous research established that Homo naledi's was 465-560 milliliters. (In today's study, the authors acknowledge those earlier numbers, based on virtual reconstructions, but also perform their own physical reconstructions and measure the volume with a water displacement method, arriving at a similar range of 460-555 mL.) For readers resistant to metric measurements, that volume range is roughly 1.9-2.3 cups or, very roughly, about a pint. It's in the same ballpark as, or just a little larger than, the brain volumes of australopiths, which precede the genus Homo and include such early hominin celebrities as Lucy and Little Foot. It's also about the same as the "hobbit" hominin Homo floresiensis — but it's notably smaller on average than the rest of the Homo crew. Homo habilis, the earliest known member of the genus, had a brain volume range from 500 to more than 700 mL. Homo rudolfensis specimens clocked in at 752 and 830 mL. Homo erectus, which had the largest geographical range of the early Homo members, also has the largest range in brain volume, from 550 to more than 1200 mL. It should be noted the authors include some controversial Homo erectus fossils considered by some camps to be subspecies or even separate lineages, such as the individuals from Dmanisi in the Republic of Georgia.

Casts of the five Dmanisi crania, on display in Tbilisi, Georgia. At about 1.8 million years in age, the hominins are the oldest members of the genus Homo found outside of Africa. While most researchers classify them as a subspecies of Homo erectus, others argue they may be more closely related to Homo habilis. (Credit G. Tarlach) As for modern Homo sapiens' brain volume, a separate study out earlier this year in Science Advances on the topic of brain size and shape evolution set our brain volume range at 1082-1832 mL (Table 1 of the study, which is open-access and an excellent read). Full Frontal So the numbers, in terms of a smaller brain volume for Homo naledi, are pretty stark, and have been the main piece of evidence critics have held up for the hominin not being capable of much fancy cognition. However, the Homo naledi endocasts suggest that the hominin's brain was, structurally, more advanced than thought. For example, Homo naledi's inferior frontal and lateral orbital gyri were organized notably more like that of other members of the genus Homo than that of australopiths. These are parts of the brain associated with complex behaviors, such as communication, planning and tool-making, that are particularly important in our lineage. Finding Homo naledi's brain was structurally similar to that of larger-brained members of the genus tells us two important things. First, it means Homo naledi itself was likely capable of more complex behavior than australopiths with a similar brain volume but different brain structure. Second, it torpedoes the old notion that Homo brains grew steadily in size and complexity until reaching the evolutionary pinnacle that is Homo sapiens (/sarcasm, just a touch). As the authors of the new research put it, "the evolution of brain size in Homo was diverse and not a simple pattern of gradual increase over time." Today's study appears in PNAS.