If all goes well, NASA will land the most sophisticated rover ever on Mars this week. Why is it a good spot to look for the signs of past life? 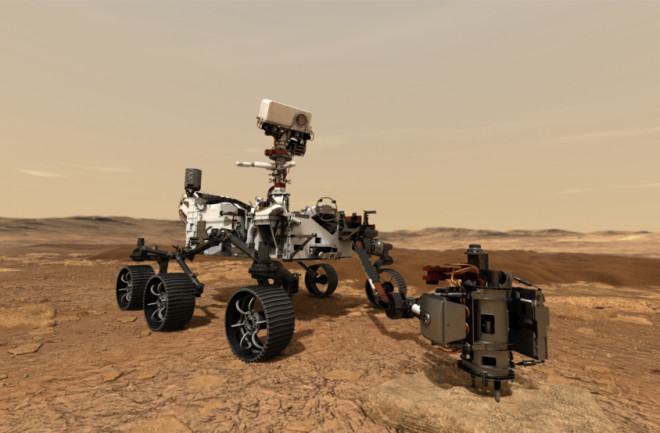 An artist's impression of the Perseverance rover on Mars. Credit: NASA/JPL-Caltech.

On the afternoon of February 18 (Earth time here in Ohio), NASA's most ambitious and sophisticated rover will hopefully land on Mars to start years of exploration around Jezero Crater. Much like NASA's other rover missions -- Spirit, Opportunity and Curiosity -- the main goal of the Perseverence mission is to understand the Martian geologic past and potentially find evidence of past life on our next neighbor out in the solar system.

So, why Jezero Crater (below)? Well, the geology of the 28-mile-wide crater plays the most important role in why we all hope that Perseverance will land successfully in a few days.

The potential river delta deposits on the western side of Jezero Crater on Mars, taken from MRO. Credit: NASA.

Jezero Crater is located along the margins of one of the larger basins in the northern hemisphere of Mars. The crater is on the west side of the Isidis Planatia, a large impact basin filled by later sediment. Just to the south of the crater is a large shield volcano known as Syrtis Major and off to the west are valleys called the Nili Fossae.

Most strikingly, the area around Jezero Crater appears to be carved by rivers. A river valley called the Neretva Vallis meanders in from the west and then exits on the east side of the crater into the Isidis Planatia. This has lead geologists to think that Jezero Crater was once filled with a lake fed by the river.

Mapping of the region by the Mars Reconnaissance Orbiter (MRO) not only showed the remarkable topography including the river channels, but also gave us a clue about the composition of the rocks in and around Jezero. A recent US Geological Survey map of Jezero Crater (yes, the USGS makes maps of other planets!) suggests that there are some fascinating and different rocks that may be related to its watery past.

The area of Jezero Crater on Mars where Perseverance is hoping to land on February 18, 2021. Image: USGS.

Geology of Mars' Wet Past

If you've never looked at a geologic map, they are full of information. The area around the Perseverence landing ellipse (above) is color-coded for the different geologic units that can be defined based on the data collected by MRO. The pinkish and salmon layers in the east (right) are mostly volcanic deposits that were likely blown into the crater. It is a flat region, so an ideal place to land the rover.

Off to the west (left) side of the ellipse are the remnants of the potential Neretva river delta -- deposits left as the river entered the proposed lake (all in blue on this map). Now, it has likely been over 3 billion years since the river flowed, so the river deposits are now inverted topography. This means that what used to be valleys are now ridges, mostly because the river channel and delta deposits are more resistant to weathering. After Perseverence lands, the plan is to head to these highlands to examine the rocks in these old river and delta deposits.

One of the most interesting aspects of Jezero Crater is the evidence from MRO that there are carbonates, clays and other minerals that likely require liquid water to form. These deposits may hold the evidence of any life that could have emerged in the ancient liquid surface waters of Mars.

Smack dab in the middle of the delta is a small crater called Belva that has to be younger than the delta. Just to the west (left) of the delta is the dark brown unit labeled (cr) that is the crater rim of Jezero. It is almost 2,300 feet up from the base of the delta deposits to the crest of the rim. Beyond that is hilly terrane that is mostly volcanic material that make up most of the surface of Mars.

If all goes well, Perseverance will spend at least 3 years exploring this region. It carried newer versions of many of the imaging and compositional instruments that are on Curiosity. However, it also carries a ground penetrating radar called RIMFAX that will map the shallower underground beneath the rover. So, we'll know more about the subsurface as well as the surface.

The rover is powered by 11 pounds of plutonium oxide, so it isn't dependent on solar power to keep working. It will also cache samples along the way for a potential sample return mission so Earth geologists can (finally) examine Martian rocks in person. Why is that important? For one, we can finally measure absolute ages for Martian rocks using radioactive elements in the rocks. We can also do other compositional analyses on the rocks using instruments that just can't be carted to Mars on a rover.

Mars may be a dried up husk now. However, many people eye it as a potential future home for humans. The Perseverence rover may not answer the question of whether life was harbored on Mars in the past, but will still help unravel its past geologic history and maybe help pave some of the way for humans to set foot on the red planet.