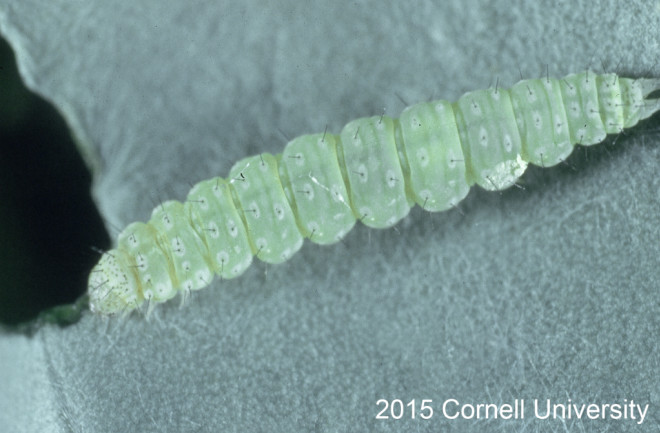 Sure, he looks cute — just don't let him near your broccoli. Photo by J. Ogrodnick The diamondback moth catterpillar (Plutella xylostella) may not look like much, but don't be fooled by its generic caterpillar-y appearance; these larval lepidopterans are one of the world’s worst insect pests. Diamondback caterpillars gorge their way through cabbages, canola, broccoli, cauliflower, and kale, costing farmers $4-5 billion annually worldwide. The worst part is that these hungry beasts always seem to be a step ahead of pest management strategies, readily evolving resistance to every organic and synthetic chemical that farmers attempt to wipe them out with. But now, scientists have created a secret weapon that the bugs cannot resist: genetically modified males whose genes kill their female offspring.

"Diamondback moths are one of the most destructive insect pests in the world," says Anthony Shelton, an international professor of entomology at Cornell University and one of the world's experts on diamondback moths. "I've seen fields, both domestically and internationally, that were destroyed by this insect. The caterpillars will just skeletonize the leaves, causing the plant to die." The extensive damage caused by these pests coupled with their reputation for rapid resistance has left farmers with little to work with, Shelton explains. "So we're always looking for new strategies to control it."

A 'skeletonized' host plant in India, completely eaten away by diamondback moths. Photo by A. M. Shelton

Enter Oxitec, a British biotech company whose goal is to create environmentally friendly ways to control insect pests that spread disease and damage crops. Oxitec scientists genetically modified these problematic moths to create ones that carry a 'self-limiting gene'. The way it works is elegant and straightforward: the modified moths carry a gene that produces a non-toxic protein that gums up the insect's cellular machinery, thus killing the modified moth. But the new gene is only expressed in females, thus males survive and reproduce like there's nothing different about them. The gene has a built-in off switch, and thus doesn't cause problems if the caterpillars are fed a diet supplemented with tetracycline, allowing mass rearing in the lab. But once released, any offspring produced by these moths will die without the scientist's special food. Theoretically, if enough males carrying this gene are released and mate with the females in a wild pest population, those females will lay eggs that are doomed to die or be male, controlling the population effectively within a few generations.

Or, in Shelton's words: "It's birth control for insects." "Depending on how you spray [with pesticides], you'd be lucky if you get 50% control," Shelton explains. But the Oxitec solution has the potential to drive pest populations down dramatically and even eliminate them locally. In other cases, such self-killing modified insects have resulted in >90% declines in the targeted species. And, Shelton points out, the idea of introducing what are effectively sterile individuals for population control isn't new. USDA scientists have been using the Sterile Insect Technique

Modern technology indeed; scientists can even track the GM moths in the population because the gene also encodes for a fluorescent protein. Video provided by Oxitec. "What's great about this technology is that it's specific to diamondback moths, so it doesn't affect the other species that are out there," he adds. But while most technologies are great in theory, it was Shelton and his colleagues' job to test the GM moths in practice. "I'm an independent evaluator in this case. My job is to make sure that it really works." And that's exactly what Shelton and his team did. In greenhouse conditions, they released Oxitec moths with non-modified moths and kept track of the population size. According to Shelton, "they were able to drive down the population in just a few generations." Then, the team took the study one step further. Because these pests commonly become resistant to pesticides, they raised pest moths on a special non-commercial GM variety of broccoli that produces the organic pesticide Bt. They were able to tract which moths in the population were resistant over time in addition to monitoring overall population sizes, and the results were astonishing. "We found that the Oxitec moths would not only drive down the pest population, they also drove down the resistance allele frequency to Bt insecticidal proteins in the pest population, so it was a double benefit." For the research team, the greenhouse studies were a huge success. "The goal of this research, and the overall goal of my program, is to try and manage insects more effectively with less environmental impact," says Shelton. Without a single pesticide or toxin, the GM moths nearly took out the pest population in as few as two generations. “The Oxitec moths are an improvement on the traditional sterile insect technology, and I think it's pretty exciting improvement." This promising study comes on the heels of another Oxitec success story, a similarly-modified mosquito, which was recently found to reduce populations of dengue-carrying Aedes aegypti in Brazil by 95%

. The company is awaiting word from the FDA for trials of GM mosquitos in Florida

, but in the meantime, scientists can't seem to praise their technologies enough. According to Shelton, the GM moths have no downsides. "From an environmental standpoint, we only see benefits."

The making of a GM moth: this video shows the a moth egg as it is injected with the special sauce that alters its genome. Video provided by Oxitec. But, he cautions, those benefits depend on the technology working as well as it seems to in the lab. "We're still in that investigative stage," he noted. "We need to do further testing." “We’re taking it one step at a time." This summer, the Cornell team will be running caged field trials, which will help determine if the modified moths really can compete for reproductive opportunities against the wild males. If they do, then the Oxitec moths will be another big step closer to commercial release. "As a society, we need to reduce our reliance on pesticides, and this is a promising technology that may help us do that." “Certainly, this is a product that, if it works well, should be taken to the next step." Citation: Harvey-Samuel et al. (2015). Pest control and resistance management through release of insects carrying a male-selecting transgene. BMC Biology 13: 49. DOI 10.1186/s12915-015-0161-1