Fighting malaria with mosquitoes seems like an bizarrely ironic strategy but it's exactly what many scientists are trying to do. Malaria kills one to three million people every year, most of whom are children. Many strategies for controlling it naturally focus on ways of killing the mosquitoes that spread it, stopping them from biting humans, or getting rid of their breeding grounds.

But the mosquitoes themselves are not the real problem. They are merely carriers for the true cause of malaria - a parasite called Plasmodium. It suits neither mosquitoes nor humans to be infected with Plasmodium, and by helping them resist it, we may inadvertently help ourselves. With the power of modern genetics and molecular biology, scientists have produced strains of genetically engineered mosquitoes that cannot transmit the malarial parasite.

These 'GM-mosquitoes' carry a modified gene - a transgene - that produces chemicals which interfere with Plasmodium's development. Rather than being suitable carriers, the bodies of the modified mosquitoes spell death for any invading Plasmodium.

But scientists can't very well change the genes of every mosquito in the tropics. To actually reduce the burden of malaria, the genetic changes that induce malaria resistance need to be spread throughout the mosquito population. The easiest way to do this is, of course, to let the insects do it themselves. And Mauro Marrelli and colleagues from the Johns Hopkins University have found that they are more than up to the task. 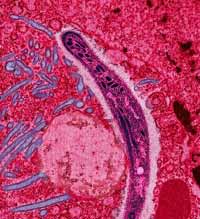 They kept cages full of equal numbers of engineered and normal mosquitoes and fed them on the blood of mice infected by Plasmodium. After nine generations, they found that the engineered insects had become proportionally more common, making up about 70% of the total population.

Like most parasites, Plasmodium affects the health of its host. So mosquitoes that are parasite-resistant are stronger and fitter than their infected peers. Marrelli found that they were about 25% less likely to die early and had more young, with every female laying an average of 60 eggs compared to the 43 managed by infected individuals. With these advantages, the transgenic mosquitoes outlasted and out-bred normal ones, and quickly established a majority in the population.

Marrelli thinks that because chronic immune responses produce health problems of their own, that cancel out the advantage of not carrying Plasmodium. In contrast, the transgenic mosquitoes are simply expressing a gene that is mostly harmless. The gene also kills Plasmodium early on in its life cycle, well before it triggers the body's own immune system.

Even though a single transgene copy does not affect the modified insects' health, it appears that two copies might have some as-yet-unknown health consequences. This may explain why the resistant mosquitoes in Marrelli's experiments did not totally dominate the population, but plateaued at 70%. The strongest mosquitoes are those with just one copy of the gene.

This means that introducing the engineered mosquitoes into the wild would not completely wipe out their disease-spreading cousins. But it would still drastically cut their numbers. Considering that malaria infects over 400 million people a year, reducing this number by 70% would be a monumental victory for international health.

Nonetheless, Marrelli is cautious about the future of malaria-resistant strains. These experiments are a proof-of-principle and their results may not bear out as planned in practice. Newer research suggests that you'd have to account for the mosquitoes' mating strategies. In the field, only a relatively small proportion of mosquitoes become infected, and he expects the spread of the transgene to be slower. But if it becomes established, it could complement other programmes for controlling malaria, by making it very hard for the parasite to re-colonise a cleared area after it has been eradicated.