Genetic Test Shows Who's Who in Cheese Bacteria (and Fungus) 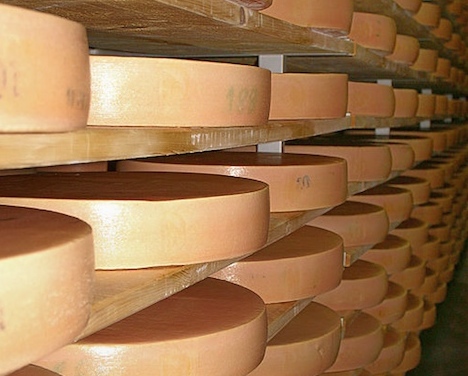 Before you enjoy your next slice of gouda or wedge of brie, you might take a moment to think of all the organisms that have nibbled it before you. Cheeses get the flavors you love from the bacteria and fungi that live on and inside them. And thanks to genetic testing, those microscopic workers are toiling in anonymity no longer. Some cheese microorganisms have effects you can easily see. Bacteria leave behind bubbles of carbon dioxide in Swiss. Mold sends blue veins through Stilton. But except for fresh varieties like ricotta or goat cheese, every cheese you taste has been ripened by microbes. Some are "starter" bacteria added to the milk at the beginning of the process; others are smeared on the outside of the cheese after it's formed, or allowed to land and grow there naturally from the environment. As these microbes break down the cheese's fats and proteins, the molecules they leave behind create its flavor. "Most studies focusing on cheese surface bacteria [have] focused on soft cheese," says Stephan Schmitz-Esser, a researcher at the Institute for Milk Hygiene at the University of Veterinary Medicine in Vienna, Austria. He and his coauthors decided to investigate a hard cheese instead: Vorarlberger Bergkäse, which we'll call VB. This artisanal Austrian cheese starts with raw cow's milk ("from Alpine pastures," Schmitz-Esser notes) and a certain set of added bacterial cultures.* The cheese ripens for 3 to 18 months while its outside is washed or brushed periodically with salt. Finally it's sold in wheels weighing nearly 70 pounds. Schmitz-Esser visited three Austrian cheese facilities, with a total of seven cheese-ripening cellars. From each cellar, he gathered scrapings from the rinds of 25 to 30 cheese wheels and pooled them into one sample. Then the researchers sequenced the RNA within each sample to look for recognizable bacterial and fungal genes. On the genus level, Schmitz-Esser says, most of the microorganisms they found (such as Brevibacterium, Brachybacterium, and Corynebacterium) are similar to those seen in other cheeses. But within these broad types of bacteria, the species living on VB make up a unique community, different from other cheeses. Several of the bacteria that turned up may even be new species, the authors write. (Four out of the seven samples also included small amounts of DNA from a bug: namely, the mite Acarus immobilis. Certain cheeses are "traditionally ripened by mites," the authors point out—but let's not dwell on that any longer.) Each of the three cheese-making facilities had a different microbial signature. When cheeses were broken down by age—younger batches, which had been ripening for less than six months, versus older ones—there was also a significant difference between their microbial communities. "Our results suggest that facilities may have an influence" on cheese microbes, Schmitz-Esser says. But "the most distinct changes were found with respect to ripening time." Surprisingly, the most abundant species on VB cheese were Halomonas bacteria. In the past, these bacteria were thought to show that a dairy facility just wasn't clean. But the salt-loving microbes, which come from the ocean, may reach cheeses via brine treatments. "We think that [Halomonas] may have an important role in cheese ripening," Schmitz-Esser says. But for now, the evidence is only circumstantial. "We currently don’t know anything about the function of Halomonas." In the long term, Schmitz-Esser hopes studies like this one can lead to even better cheese. "Clearly the microbial communities are key to flavor production," he says. Figuring out how different microbes contribute to cheese ripening—how their actions create those signature flavors—could help cheese producers create exactly what they want. For now, though, "the first step is to identify who is there."