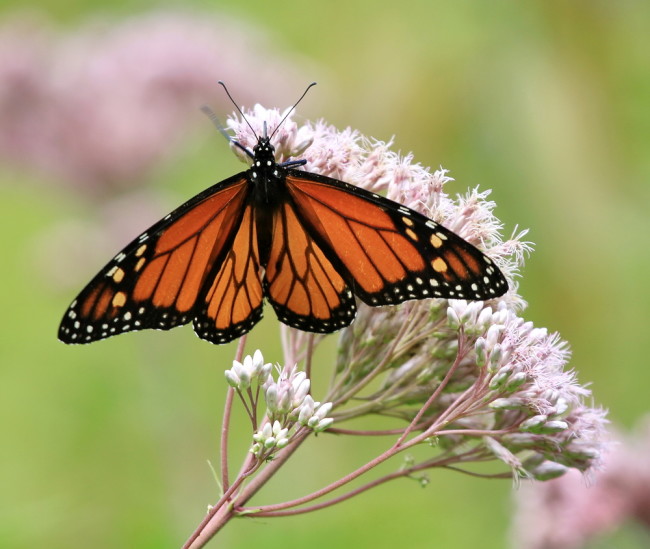 For monarch butterflies, the path to endangered species status could be paved with good intentions. Throughout the United States, monarch-lovers are replenishing the supply of milkweed — the plants monarchs lay their eggs in — by growing it in their gardens. However, they’re planting the wrong species of milkweed. And in doing so, well-intentioned gardeners are actually putting more stress on declining monarch populations by convincing them to give up the annual migration altogether.

Every year, millions of monarchs migrate from their summer breeding grounds in the eastern U.S. and Canada to wait out the winter in central Mexico. However, since the 1990s, monarch numbers have declined by nearly 90 percent. Humans, with all our farm fields, roads and buildings, are largely to blame for the monarch’s decline. Deforestation has decimated the monarch’s preferred habitats both north and south. And herbicide-resistant crops allow farmers to spray stronger weedkillers on their fields, which kills native milkweed in the process. To counteract the loss of milkweed on farm fields, sympathetic gardeners in southern states are giving monarchs a meal by planting milkweed in their backyards. Unfortunately, the milkweed they’re planting is an exotic tropical species called Asclepias curassavica that grows year-round, unlike the native species, Asclepias incarnata, that dies off seasonally. So, rather than fly south for the winter when the milkweed dies off, monarchs are forgoing the Mexico migration, living and breeding year-round in the south. And that's trouble.

That's because of a protozoan parasite called Ophryocytis elektroscirrha (OE). This parasite, if eaten by monarch caterpillars, causes wing deformities in the adult butterfly and shortens their lifespan. Infected butterflies shed spores that can then go on to infect other youngsters. OE isn't usually a problem, though, because of two things: the butterflies' annual migration, and the type of milkweed they eat. Infected monarchs will generally perish on the trip to Mexico, which helps control OE’s spread. And by the time they return, the native milkweed plants have died and new ones have grown up — another natural check on spreading the infection. But the tropical type of milkweed survives cold winters, and so does its pestilent guest.

To see just how migration was affecting monarchs' OE infection, researchers used a combination of field studies and citizen science. They tested monarchs at various breeding sites in the U.S. and Mexico over a period of two years, compiling more than 5,500 samples.Samples were taken by applying tape to the abdomens of monarchs (none were harmed) to nab spores if they were present. The researchers found that monarchs that overwintered in the United States were 5-9 times more likely to host the parasite than were monarchs that spent the winter in Mexico. Researchers published their results Wednesday in Proceedings of the Royal Society B.

Tropical milkweed is far easier to purchase than the native species, but stores selling the native seeds are on the rise. If you can’t get your hands on native milkweed, researchers suggest cutting tropical milkweed down twice a winter to contain OE. The U.S. Fish and Wildlife Service is currently reviewing the monarch’s status under the Endangered Species Act, and we should know this year if monarchs will be added to the endangered species list. In the meantime, the monarch’s story just goes to show how complicated our relationships with other species really can be.