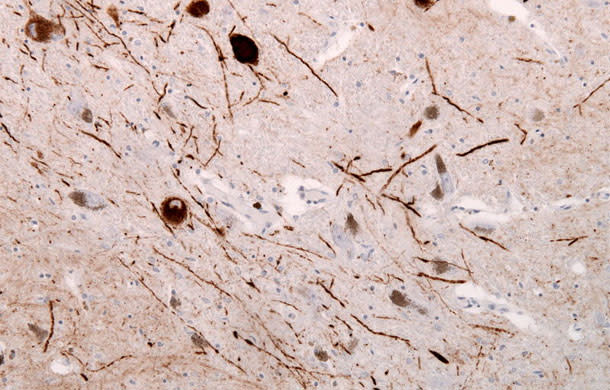 This post contains material from an older one, updated based on new discoveries.

There are many things you don’t want gathering in large numbers, including locusts, rioters, and brain proteins. Our nerve cells contain many proteins that typically live in solitude, but occasionally gather in their thousands to form large insoluble clumps. These clumps can be disastrous. They can wreck neurons, preventing them from firing normally and eventually killing them. Such clumps are the hallmarks of many brain diseases. The neurons of Alzheimer’s patients are riddled with tangles of a protein called tau. Those of Parkinson’s patients contain bundles, or fibrils, of another protein called alpha-synuclein. The fibrils gather into even larger clumps called Lewy bodies. Now, Virginia Lee

from the University of Pennsylvania School of Medicine has confirmed that the alpha-synuclein fibrils can spread through the brains of mice. As they spread, they corrupt local proteins and gather them into fresh Lewy bodies, behaving like gangs that travel from town to town, inciting locals into forming their own angry mobs. And as these mobs spread through the mouse brains, they reproduce two of the classic features of Parkinson’s disease: the death of neurons that produce dopamine, and movement problems. This is the clearest evidence yet that alpha-synuclein can behave like prions, the proteins that cause mad cow disease, scrapie and Creutzfeld-Jacob disease (CJD). Prions are also misshapen proteins that convert the shape of normal peers. But there is a crucial distinction: prions are infectious. They don’t just spread from cell to cell, but from individual to individual. As far as we know, alpha-synuclein can’t do that. Aside from this, the similarities are striking. “It’s a spectacular and extremely important paper, which adds further support to the idea that Parkinson’s disease may be a prion disorder,” says Warren Olanow

from Mount Sinai Hospital. “It would be wrong to say the hypothesis is now true, but it certainly becomes even more appealing.” Patrik Brundin

from Lund University adds, “I think it’s yet another landmark study in the short history of this idea.” The spread of corrupted proteins might be a unifying feature of many brain diseases, including Alzheimer’s

, and Parkinson's. The latter tale took off in 2008, when several groups showed that normal foetal neurons develop Lewy bodies

if they’re transplanted into the brains

of a Parkinson’s patient. This suggested that alpha-synuclein fibrils can seed new clumps of diseased proteins in previously healthy cells. A year later, other groups showed that if you can shunt alpha-synuclein fibrils into new cells, they create more fibrils. But all of these studies either forced the fibrils in, used massive concentrations of them, or exposed neurons to the fibrils amid a cocktail of other chemicals. Then last year, Lee’s team member Laura Volpicelli-Daley showed that fibrils can spread their corruption under more natural conditions. Neurons readily absorb pre-made fibrils, which then start gathering local synuclein proteins into Lewy bodies, eventually killing the cell. Those experiments, while important, were still done in cells in a dish. Now, Lee’s group has shown that fibrils can also spread through a real brain. Kelvin Luk injected pre-made fibrils into normal healthy mice, in a part of the brain called the dorsal striatum. Within 30 days, Lewy bodies had appeared. Over the next six months, these clumps of fibrils spread progressively from cell to cell along the brain’s highways, to other regions connected to the dorsal striatum and beyond. Dopamine-making neurons were particularly badly hit, particularly those in an adjoining part of the brain called the substantia nigra. They built up Lewy bodies, and subsequently died. By six months, a third of them had vanished. That’s exactly what happens in the brains of human Parkinson’s patients – dopamine-making neurons die off in the substantia nigra. Producing dopamine is vital for the brain, but hard on neurons. The process releases a blitzkrieg of oxygen molecules that are prone to destructive chemical reactions. This existing stress could make these neurons more vulnerable to fibrils, or even speed up the creation of fresh fibrils

. In humans, the substantia nigra is connected to parts of the brain that control our movements, and dopamine helps to control those motor circuits. As the dopamine neurons die, movements become slow, difficult, and uncontrolled. Luk started to see signs of such problems in his mice, when he made them run on a rotating cylinder, or hang from a wire. Although they didn’t have any major behavioural problems, they had clearly started to lose their coordination and balance. Lee says that the mice never progressed to full-blown mental problems because they were euthanized before that point. It’s a compelling chain of events. Man-made alpha-synuclein fibrils can fashion even more fibrils from healthy proteins, and gather them into Lewy bodies, just as we see in brains with Parkinson’s. These fibrils spread through the brain along existing connections, as we see in Parkinson’s. They kill off the right kind of neuron in the right part of the brain, and start to produce the right kind of symptoms. And all of this happens in the brains of normal, healthy mice that haven’t been genetically modified. “This has not been accomplished in any other neurodegenerative diseases, not even in prion disease,” says Lee. Still, the mice stop short of showing the full range of degenerative symptoms we see among people who bear the same fibrils. “They’ve not shown that the animal develops Parkinson’s, but maybe it’s not possible to do that, because it’s an animal,” says Olanow. “That’s an important loop to close.” He says that the next step is to piece together the details of each step: how do the fibrils move from cell to cell, and how do they transform normal synuclein proteins into misfolded ones? These details matter if we’re ever to find ways of preventing the disease, by stopping the spread of these corrupted proteins. Lee says all of this should be possible because they can clearly duplicate the progression of Parkinson’s in rodents. She can also use the mice to study how genes and other factors affect the spread of the corrupted proteins. “There is so much we can do now,” she says. “I think it’s really time to make an effort to find drugs that could inhibit this process,” adds Brundin. He mentioned that an Austrian company has developed a vaccine that is meant to train the immune system to recognise alpha-synuclein, and produce antibodies against it. The vaccine, known as PD01A, is meant to prevent Parkinson’s rather than simply addressing its symptoms, and it’s currently going through a preliminary clinical trial called AFFiRiS.