Galapagos Tortoises Make a Comeback, Thanks to Rat Eradication 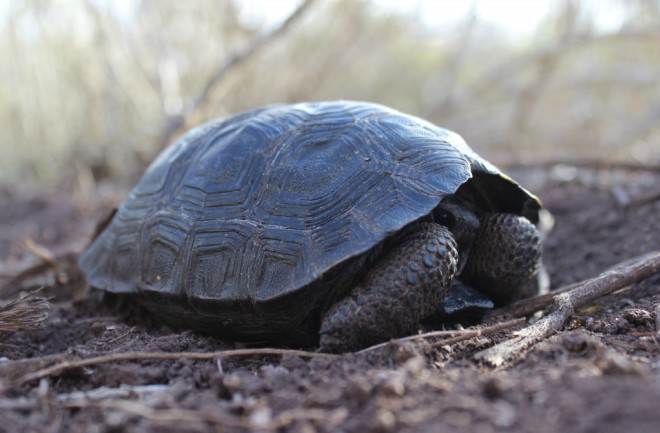 A baby tortoise spotted on Pinzón Island. (Credit: James Gibbs) When it comes to protecting endangered species, humans can do more harm than good. However, sometimes our efforts are exactly what Mother Nature ordered. In 2012 conservationists waged an aggressive campaign to poison the invasive rats living on Pinzón Island, part of the world famous Galapagos archipelago. The rats — introduced through human activity — are the top enemy for saddleback giant tortoises, one of the world’s most ancient and threatened species. Fortunately, it seems the carpet-bomb approach to Pinzón’s rat problem is working: For the first time in over 150 years, the population of saddleback giant tortoises is set to recover on its own and has nearly tripledsince conservationists stepped in to help back in 1959.

Pinzón’s rats eat everything, and that includes tortoise eggs and hatchlings. Because of ravenous rats, it's thought that no tortoises have hatched in the wild on the island in more than 150 years. At one point, Pinzón was home to only 100 or so tortoises, and they were all well into old age. So, in the 1960s the Galapagos National Park set up a comprehensive program to save the tortoises. Their tireless conservation efforts over 50 years primarily involved finding eggs and rearing hatchlings in captivity until they were too big for rats to target. The Galapagos National Park Service also had another trick up their sleeves: covering a volcano on Pinzón with poisoned rat bait. In doing so, they decimated the rat population and tortoises finally had a fighting chance to rear their young in the wild. And they did.

A baby tortoise hides its face from the camera in this photo taken in December. Due to decades of conservation efforts, the saddleback giant tortoises are making a comeback. (Credit: James Gibbs) According to a correspondence to Nature, ten newly hatched saddleback tortoises were spotted on the island in December — proving they could reproduce without the protective guidance of humans. Furthermore, baby giant tortoises are quite difficult to spot, so there were probably many more. James Gibbs, an environmental scientist at State University of New York, encountered over 300 tortoises on his trip to Pinzón. In a blog post, Gibbs said he estimates the total saddleback tortoise population on the island is roughly 500 — far from the 100 or 200 estimated six decades ago. Similar breeding programs and pest control efforts have yielded success stories for tortoises on other Galapagos islands. For a creature that can live well over 100 years, these efforts mean a drastically more promising outlook for a long time to come.