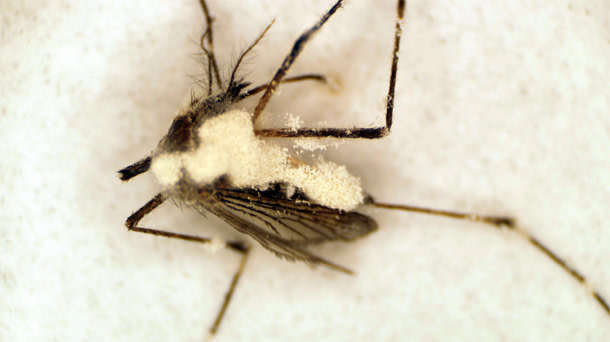 Meet our newest potential weapon against malaria – a fungus loaded with a chemical found in scorpion venom. Metarhizium anisopliaeis a parasitic fungus that infects a wide variety of insects, including the mosquitoes that spread malaria. Their spores germinate upon contact and the fungus invades the insect’s body, slowly killing it. Now, Weiguo Fang from the University of Maryland has modified the fungus to target the malaria parasites lurking inside the mosquitoes. Fang loaded the fungus with two chemicals that attack the malaria parasite Plasmodium falciparum. The first is a protein called SM1 that prevents the parasites from attaching to the mosquito’s salivary glands. By blocking Plasmodium‘s path, SM1 stops the parasite from travelling down the mosquito’s mouthparts into the people it bites. The second chemical is scorpine – a toxic protein wielded by the emperor scorpion, which kills both bacteria and Plasmodium. This double whammy of biological weapons slashed the number of parasites in mosquito saliva by 98%. Fang’s group is one of many who are trying to exploit fungi in the battle against malaria. These efforts are sorely needed. For decades, insecticides have been the mainstays of malaria control but mosquitoes have increasingly evolved to resist them. With few new chemicals on the horizon, biological weapons like fungi could be a decent replacement. Fungal spores can be sprayed on surfaces, cloth and nets, where they can stay for months. Mosquitoes don’t need to ingest the spores to become infected. All it takes is a touch for the spores to germinate and penetrate the insect. In 2005, a British duo – Matt Thomas and Andrew Read – managed to kill more than 90% of malarial mosquitoes by spraying the fungi on surfaces. They reduced the number of insects that could transmit the disease by 80 times. Later, Willem Takken from Wageningen University found that the fungi can also kill insecticide-resistant mosquitoes. They even make the insects vulnerable to insecticides once again. And just last week, Takken’s group used the fungal spores to kill mosquito larvae, which swim at the surface of stagnant water. They used a synthetic oil to spread the spores over the water. Compared to untreated spores, these oily ones halved the proportion of larvae that turned into adults. So if natural fungi are so potent, why bother tweaking them? It’s all in the timing. The fungi need around two weeks to finish off a mosquito. It takes that long for malaria parasites to mature and enter the insect’s salivary glands, where they can move to another host. If the mosquitoes are infected with fungi soon after they pick up Plasmodium, they’ll die before they can pass them on. If they’re infected any later, they could still spread malaria before dying. It’s possible to alter the fungus so it kills mosquitoes more quickly but this approach has its own problems. At the moment, the fungus only kills old mosquitoes, so it doesn’t really affect their chances of producing young. As a result, there’s little pressure on them to evolve resistance. That could change if the fungus starts killing mosquitoes earlier.

What you really want is a fungus that kills mosquitoes as slowly as the natural versions, but that stops them from passing on the malaria parasite in the meantime. That’s exactly what Fang created. He genetically engineered strains of the fungus to carry either SM1 (short for “salivary and midgut peptide 1”), scorpine, or a fusion of the two. He got the best results by pairing the fusion protein with pure scorpine. The latter killed the parasites outright, and the former prevented the few survivors from reaching the salivary glands. The fungi slashed the insect’s ability to spread Plasmodium by five times, even if their malaria infections were very advanced. They successfully prevented the parasites from spreading while the host slowly died. But Takken isn’t convinced that this “interesting strategy” will do much good. “[It] would only be advantageous if one wants an immediate transmission-blocking effect. In practice, that will rarely be necessary,” he says. It might help against viral infections like yellow fever, which are also carried by mosquitoes but which spread more quickly than malaria. Nor are the modified fungi without risks. M.anisopliae is fairly indiscriminate and can infect a variety of insects. In some ways, that’s promising because it could also be used to control tsetse flies, which spread sleeping sickness, and other species of mosquito that carry dengue fever and filariasis. On the other hand, the fungus could kill beneficial insects too. Fang thinks it should be possible to restrict the fungus to certain insect species by loading them with targeted antibodies. Takken is also concerned about using a genetically engineered fungus. “I believe that it’s too early for such strategies as long as we have good methods for fungal mosquito control that do not require engineered fungal strains.” Read, now at Pennsylvania State University, has similar concerns. “We have so far barely scratched the surface of what is possible with natural fungal variation,” he says. However, Read thinks that the modified fungus has potential. “The approach is very practical: fungal biopesticides are already produced and used in Africa for locust control,” he says. “Will the public be OK with having a GM product sprayed in their houses?” he asks. “My own view on this is that they should be. Up against malaria, hypothetical concerns about GM pale.” Read says that the biggest hurdle is a lack of interest from funders, who are focused on chemical insecticides. “It remains to be seen whether they can be persuaded to take biologics seriously. Perhaps this paper will help, although great ideas and great data, and even papers in Science, have not so far proved sufficient.” Reference: Fang, Vega-Rodriguez, Ghosh, Jacobs-Lorena, Kang & St Leger. 2011. Development of Transgenic Fungi That Kill Human Malaria Parasites in Mosquitoes. Science http://dx.doi.org/10.1126/science.1199115Image from Rob Graham and Jon Darbro More on malaria: