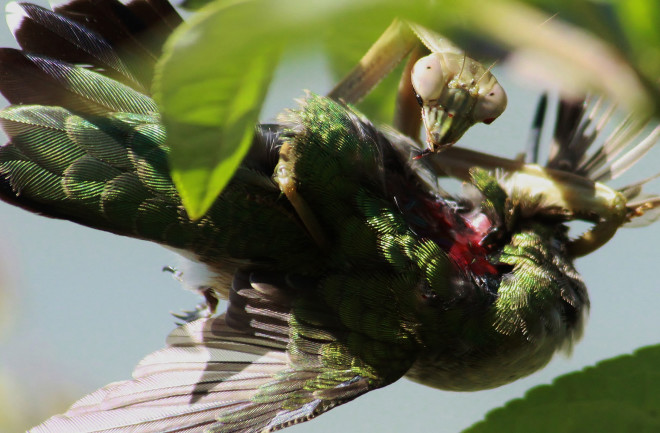 A praying mantis making a meal of a ruby-throated hummingbird. (Credit: “What’s That Bug?”/Randy Anderson)

Poor hummingbirds. The fragile, fleet-winged birds often don’t make it past their first year of life as they are tasty snacks for cats, large-mouth bass, snakes, lizards…you get the idea. Now, perhaps surprisingly, we can add praying mantises to that macabre list.

A new paper reviewing the avian death-literature finds that praying mantises are enthusiastic predators of the tiny birds, and they go about it in gory fashion, often burrowing in through the eye sockets to tear apart the birds’ brains. Included in a press release are a number of pictures, and the results aren’t pretty:

All in all, researchers from the U.S. and Switzerland found 147 cases of mantis-on-hummingbird predation spanning every continent but Antarctica. Twenty-four species of birds and 12 mantis species were accounted for, an indication that the behavior is widespread. Hummingbirds became mantis easy targets after getting caught in bird feeders and plants. Once ensnared, the odds were pretty grim: The researchers note that only two percent of birds managed to escape the insects’ oversized claws, although some 20 percent were freed by humans.

A mantis preys on a hummingbird that was impaled on a barbed wire fence. (Credit: Megan Ralph, Dryad Ranch)

More than 70 percent of the cases were from the U.S., where praying mantises were released decades ago in an attempt to control pests. As enthusiastic predators, mantises are happy to chow down on anything they can get their claws on though, and hummingbirds happen to be squarely in their sights. The results were published last month in the Wilson Journal of Ornithology.

The number of birds killed by mantises still pales in comparison to those killed by cats and man-made objects like wind turbines, however. In fact, the reflective windows in office buildings probably rack up far more bird deaths. Still, the statistics serve as another example of the unintended side effects that result from releasing invasive species into a new environment. It’s also a reminder that nature is quite brutal.