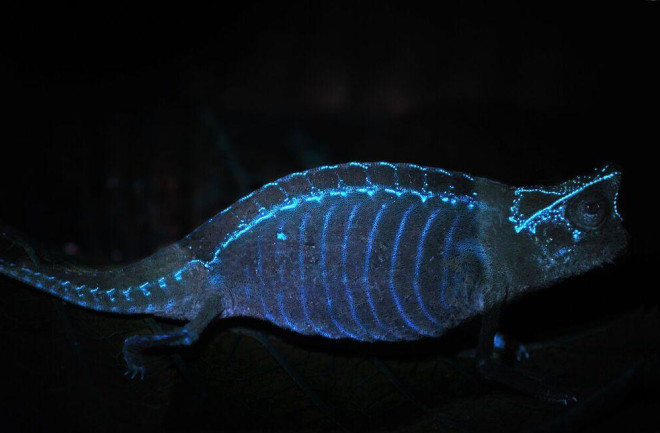 Many chameleons glow brightly under a UV lamp. (Credit: David Prötzel/ZSM/LMU) Shine an ultraviolet light on a chameleon in the dark, and it will light up with an eerie blue glow. It's not their color-changing skin at play here, either. It's their bones. It's long been known that bones fluoresce under ultraviolet light, some researchers have even used the property to find fossils, but our bones are usually all covered up. To let the light out, chameleons have evolved rows of small bony outgrowths along their skeletons that sit just beneath the skin, making it thin enough for the glow to shine through, say researchers from Germany. It's the first time researchers have noticed the ability among chameleons, and they think it's used for communication and for sexual selection. Chameleons can see UV light, though not every animal can, and it could function as a form of secret communication in the rain forest. The trait shows up around the eyes and temporal regions most frequently, both areas commonly associated with communication in chameleons, they say, and males seem to have more of the bony bumps that cause the glow, indicating that it probably plays a role in mating as well.

(Credit: David Prötzel/ZSM/LMU) Not every chameleon possesses the ability to fluoresce visibly, though. The trait seems to be most dominant in species that live in rain forests, as opposed to open grasslands, and the researchers suggest this is because forests are typically darker, and the glow is more easily seen. The electric blue would show up visibly against the dull greens and browns of the rain forest, helping chameleons to stand out to their friends. And their skin might help make the color even more distinct, the researchers suggest in a paper published Monday in Nature Scientific Reports, acting as an optical filter to highlight blue wavelengths of light.

The researchers suggest that UV fluorescence might actually be more common than we think, especially in reptiles. Plants, insects and many different kinds of sea creatures already use bioluminescence for a range of things, and the ability could be widespread in the animal kingdom as well. Scorpions, for example, glow bright green under a UV light. To find more, all we might have to do is look.