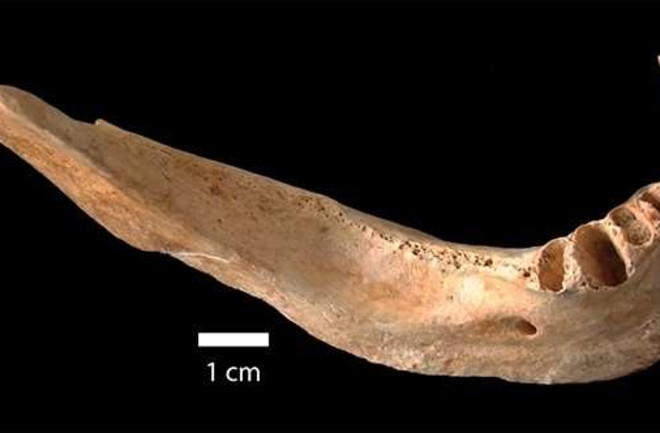 The mandible of a victim of the Hiroshima bombing. (Credit: Credit: Sergio Mascarenhas (IFSC-USP)) Before dropping the first nuclear bomb ever used in combat, American scientists studied Japan looking for a target that could maximize damage. Hiroshima's flat, open landscape caught their eye – it offered little topography that could slow the blast. Then weapons engineers dialed in the bomb's settings – they wouldn't need much pressure to level the city's thatched roof houses. Some 70,000 people died on August 6, 1945, as Little Boy struck Hiroshima, wiping out roughly 70 percent of the city. Tens of thousands more died from radiation and injuries in the months ahead. Scientists soon started studying how the radioactive fallout sickened people and impacted their DNA.

A group of Brazilian scientists followed up on that work in research recently published in the journal PLOS ONE. They managed to deduce the exact radiation dose absorbed into victims' bones after the bombing. According to the team, this study is unique in using human tissue samples from Hiroshima victims. The work grew out of research done on shellfish in the 1970s. A Brazilian physicist named Sérgio Mascarenhas was trying to date items found at archeological sites in his country based on how much radiation they'd received from elements like thorium that occur naturally in sand. But Mascarenhas realized this work had other implications, too. He traveled to Japan and was able to obtain a jawbone from a victim of the Hiroshima bombing. His analysis on the bone proved promising, but with the rudimentary technology and without today's computers, he wasn't able to totally separate the background radiation levels from the bomb blast radiation. Four decades later, Angela Kinoshita of Universidade do Sagrado Coração in São Paulo State, revisited that bone sample using Mascarenhas original approach and modern equipment. Her team was able to see the kinds of detail he couldn't. The jawbone they looked at registered a radiation dose of 9.46 grays — just half that, 5 grays, can be fatal. That number lines up with data from bricks and other inorganic substances measured near the blast site. "There were serious doubts about the feasibility of using this methodology to determine the radiation dose deposited in these samples,” Kinoshita said in a press release. However, the team now believes their research points the way to additional forensic research that could better detail the nuclear aftermath. And they're now looking at ways of drastically improving their accuracy. The researchers said that there's been renewed interest in this kind of work because of nuclear terrorism concerns in places like the U.S. "Imagine someone in New York planting an ordinary bomb with a small amount of radioactive material stuck to the explosive,” said study co-author Oswaldo Baffa of the University of São Paulo's Ribeirão Preto School of Philosophy, Science & Letters. “Techniques like this can help identify who has been exposed to radioactive fallout and needs treatment."