From the Laotian Forest, a New Bald Bird: Meet the Barefaced Bulbul 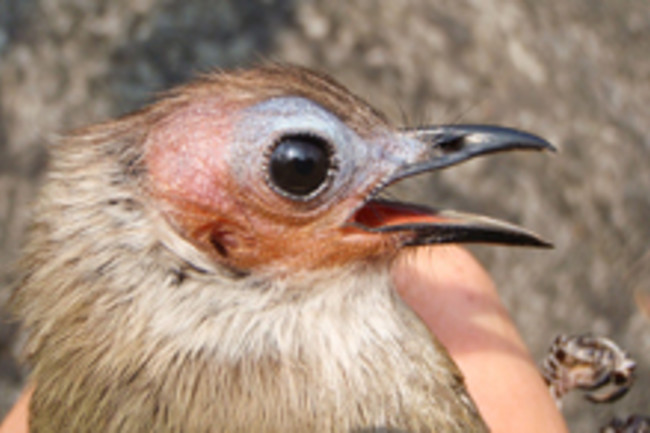 Just when it seemed that there were no more mysteries left in the wild parts of the planet, scientists have turned up a new species of bird--an odd-looking creature that has been named the Barefaced Bulbul because of its mostly bald head. The never-before seen songbird was spotted in a remote forest in Laos, and the find provides a cheerful contrast to the steady drumbeat of endangered species news.

Despite the ever-spreading imprint of humanity on this small planet, scientists keep discovering new species, even among relatively conspicuous classes of vertebrates like mammals and birds [The New York Times, blog].

The new bulbul is about the size of a thrush, and sports olive green feathers on most of its body. But it has a bald, pink face with just one line of feathers that ornaments its head like a mohawk.

Hardly a shy and retiring bird, the bald-headed bulbul foraged and noisily moved about the researchers during the day, making them wonder how this eye-catching bird went undiscovered for so long. "Certainly one reason is that the bird appears to be truly restricted to some very harsh and inaccessible terrain in Indochina" [Discovery News],

Researchers found the new species in forests growing on the sides of tower-like limestone structures called karsts. Most of Laos's forested karsts lie within legally protected areas. Still, there's a chance that quarrying limestone for road construction in similar but unprotected areas could endanger the songbird and other wildlife, experts say [National Geographic].

The findings were published in the ornithological journal Forktail. It's not yet clear what benefit the bird's bald head confers; another prominent baldy, the vulture, is thought to have lost its head feathers to keep from picking up bacteria and parasites from the carrion it feasts on. But a songbird would have no such concerns. Clyne suggests that instead, the baldness may

"play some kind of a role in communication between the sexes" [LiveScience].

Related Content: 80beats: An Ostentatious Air Conditioner: The Toucan’s Big Beak 80beats: To Read the Brain of a Pigeon, Scientists Outfit It With a “Neurologger” 80beats: Couple That Saw Quick Evolution in Darwin’s Finches Wins Big Prize 80beats: When a Hummingbird Goes Courting, He Moves Faster Than a Fighter Jet 80beats: Not So Bird-Brained After All: Rooks Make and Use ToolsImage: Iain Woxvold / University of Melbourne / Wildlife Conservation Society