Frogs use their eyes to push food down while swallowing. 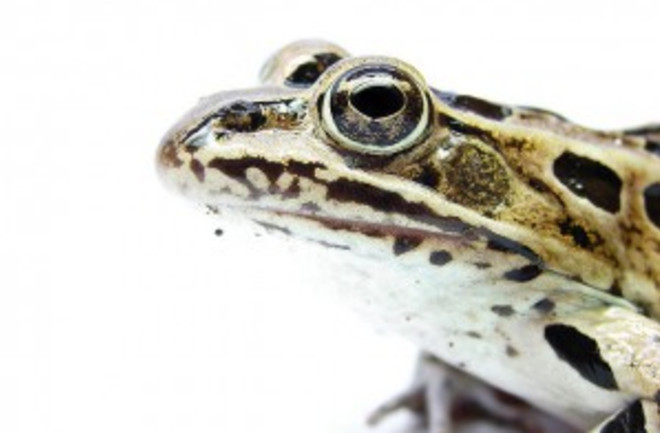 You may have noticed that frogs close their eyes when swallowing. But here's a twist: according to this study that has been making the rounds on teh interwebs, they are doing more than just blinking. Here, scientists used X-rays to film frogs while they were chowing down on crickets. It turns out that while swallowing, a frog's eyes actually retract down towards its esophagus. Not only that, but eliminating the ability of the frog to retract its eyes nearly doubles the number of swallows it takes to choke down a single cricket. We're still not quite sure why Kermit never broke out this party trick: it might just have been weird enough to scare off Miss Piggy!

"Most anurans retract and close their eyes repeatedly during swallowing. Eye retraction may aid swallowing by helping to push food back toward the esophagus, but this hypothesis has never been tested. We used behavioral observations, cineradiography, electromyography and nerve transection experiments to evaluate the contribution of eye retraction to swallowing in the northern leopard frog, Rana pipiens. Behavioral observations of frogs feeding on 1.5 cm long crickets reveal a high degree of variability in eye retraction and swallowing. Eye retraction can occur bilaterally or unilaterally, and both swallowing movements and eye retraction can occur separately as well as together. During swallowing, cineradiography shows that the eyes and associated musculature retract well into the oropharynx and appear to make contact with the prey item. This contact appears to help push the prey toward the esophagus, and it may also serve to anchor the prey for tongue-based transport. Electromyographic recordings confirm strong activity in the retractor bulbi muscles during eye retraction. After bilateral denervation of the retractor bulbi, frogs maintain the ability to swallow but show a 74% increase in the number of swallows required per cricket (from a mean of 2.3 swallows to a mean of 4.0 swallows per cricket). Our results indicate that, in Rana pipiens feeding on medium-sized crickets, eye retraction is an accessory swallowing mechanism that assists the primary tongue-based swallowing mechanism."