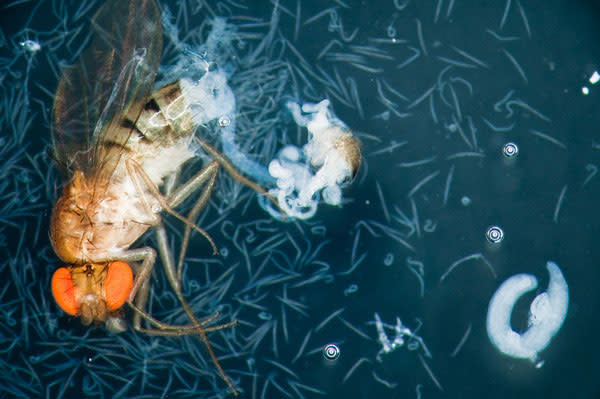 Animals must wage a never-ending war against parasites, constantly evolving new ways of resisting these threats. Resistance comes in many forms, including genes that allow their owners to shrug off infections. But one species of fly has developed a far more radical solution – it has formed a partnership with a bacterium that lives in its body and defends it against a parasitic worm. So successful is this microscopic bodyguard that it’s spreading like wildfire across America’s besieged flies. The fly Drosophila neotestacea is plagued by a nematode worm called Howardula. Around a quarter of adults are infected and they don’t fare well. The worm produces thousands of young in the body of its hapless host, and the little worms make their way into the outside world via the fly’s ovaries. Not only does this severely slash the fly’s lifespan, it also always sterilises her. But according to John Jaenike from the University of Rochester, the fly is fighting back. In the lab, he showed that worm-infected flies retained their fertility if they were also infected with a bacterium called Spiroplasma (below). The same was true in the wild – females carrying the bacteria and the worm were more than 10 times more fertile than those that just bore the worm. In some way, Spiroplasma hampers the growth of Howardula, halving the size of female worms who shared a fly with them.

Spiroplasma itself commonly infects insects and this is the first time it has been cast in the role of protector. In some cases, it can be a trouble-maker. Because it is passed down from mother to daughter, it sometimes kills the males of the species it inhabits, skewing the sexes in a population-threatening way. If it’s doing the same in the fly, it’s clear that the benefits it provides are outweighing these drawbacks, for the bacterium is clearly spreading throughout the American population. Jaenike couldn’t find any traces of Spiroplasma in specimens of D.neotestacea that were collected in the 1980s and stores in museums. Among these museum specimens, virtually all of those that also harboured Howardula worms were clearly sterile, so back then, the fly hadn’t found a way to resist the worm. In the eastern states, it’s clear that Spiroplasma went from infecting less than 15% of flies in the 1980s to around 80% in some states today. This now-beneficial bacterium is on the march. While it’s very common in the east, it’s virtually absent in the west even though Howardula infects flies at similar rates throughout all of North America. As females carrying the protective Spiroplasma give birth to similarly infected daughters, so the range of the bacterium slowly creeps westwards. And all of this was done in 2008. By now, Spiroplasma may well have made its west coast breakthrough. Spiroplasma seems to have been a long-term partner for the fly, long before it became more common and long before Howardula came onto the scene. There are a couple different strains of the bacterium but both of them provide resistance against the worm, which suggests that Spiroplasma itself hasn’t adapted to the rising threat of Howardula. It seems the spread of Spiroplasma has been fuelled by the recent rise of Howardula in North America. That imposed a strong evolutionary pressure upon the flies to evolve some sort of defence, and they ended up doing so by increasing the frequency of their defensive bacterium at a breakneck pace. For now, it’s not clear what the partnership between fly and bacterium was like before this point. However, it seems that D.neotestacea has responded to the emerging threat of a parasitic worm by shifting to a bacterial defence, using a hitchhiker that had been living in its bodies for many years previously. Reference: Science http://dx.doi.org/10.1126/science.1188235More handy bacteria: