Freedom From Fungus: Why Don't Humans Have Chestnut-Style Blights and White Nose-Style Syndromes?

Sarah Zhang is Discover's web intern. See her blogging here and here, and follow her on Twitter at @sarahzhang.

Delegates to Indiana's constitutional convention worked under this tree in 1816. It later succumbed to Dutch elm disease.

Unless you have a weakened immune system or a stubborn case of athlete’s foot, it’s unlikely you spend much time worrying about fungi. And you shouldn’t—fungal diseases are not generally a big problem for a healthy person; common ones like athlete’s foot are annoying but not serious. In terms of infections, it's bacteria, parasites, and viruses that kill us. But the rest of nature tells a different story. According to a recent review of fungal diseases

in Nature, fungi are responsible for 72% of the local extinctions of animals and 64% among plants. White nose syndrome

in bats and Dutch elm disease

are two high-profile examples of extremely deadly fungal diseases gaining wider ranges through global trade. While each fungus itself is unique, many fungal pathogens share several special abilities that make them especially lethal. Unlike viruses and most bacteria, fungi can survive—and survive for years—in dry or frigid environments outside of hosts. All they need to do is make spores: small, hardy reproductive structures containing all the necessary DNA to grow a new fungus. As spores, fungi can tough out adverse conditions and drift thousands of miles in the wind to find more livable settings. Aspergillus sydowii, for example, hitches a ride in dust storms from Africa to the Caribbean, where it infects coral reefs. They’re also ubiquitous in the air; there are one to ten spores in every breath you take. Wheat stem rust, a common fungus that causes $60 billion of crop damage a year, produces up to 10^11 spores per hectare, and they can travel 10,000 kilometers through the atmosphere to find new hosts. That’s only taking into account one of its five spore forms, which are produced at different times in its life cycle. For plants in general, fungi are the number one infectious threat, far above bacteria or viruses. Many fungi are also generalists that use a scorched-earth strategy to parasitize a wide range of hosts. To invade host cells, viruses need to sneak their way in by fitting into specific proteins like a key in a lock. Because viruses need to have this precision, it's hard for them to jump from one species to another one with a different set of proteins, and it's a big deal when it does happen. Fungi, on the hand, don’t need to enter cells; like the mold that eats your bread, it squirts its digestives juices and rots everything in sight. While viruses nimbly pick your locks, fungi are like a bomb that will blow up your door—or anyone else's. Being generalists has another added bonus for fungal pathogens: They can completely wipe out a main host while living in other species as backup. For bacteria or viruses, killing an entire species is usually a bad bet for survival; get rid of your host and you’ve got nowhere to go yourself. In contrast, the fungus Batrachochytrium dendrobatidis, which eats away at the skin of amphibians,is able to infect 508 different organisms, killing 100% of some species but lurking in others without doing much harm. The unaffected species act as reservoirs that can harbor and even spread B.dendrobatidis as it "looks" for other hosts. 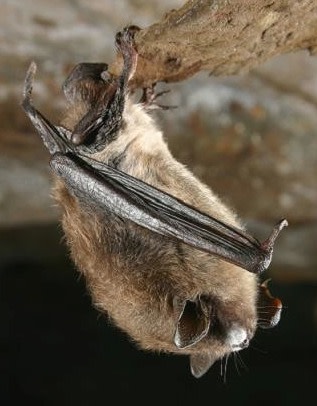 A little brown bat with white nose fungus on its muzzle.

Some fungi can also lie in wait in the environment, not as spores but as living fungi that feed on decaying matter. For example, the fungus that causes white nose syndrome, Geomyces destructans, has been recovered in the soil in bat caves, and scientists think that it lurks in caves during the summer, surviving off of nutrients in the dirt and bat guano (droppings). The fungus can only infect hibernating bats, so it must live outside of its host for the majority of the year. Come winter, bats go into hibernation and the infection cycle starts again. G. destructans, too, is extremely deadly, killing 90% of the animals it infects or an estimated 6 million bats

[pdf] since it first appeared in North America in 2006. The fungus wakes bats up during their hibernation, which makes them burn out their fat reserves too quickly and starve to death. That G. destructans can only infect bats during hibernation is a clue to the key reason we don’t have much to fear from fungal infections. During hibernation, the normally warm-blooded bats drop their body temperatures significantly to save energy—and that’s when G. destructans attacks. Fungi in general just don’t like high temperatures. A 2009 analysis of 4,802 fungal strains

[pdf] found that the number of surviving strains drops off rapidly as incubation temperature increased from 30° to 40° Celsius. The researchers suggest that fighting off fungus may be one reason why our body temperature is fastened at 37° C. Microbiologist and immunologist Arturo Casadevall has even speculated

that the anti-fungal protection of warm bodies may have been one of our ancestors' advantages over the dinosaurs. In the aftermath of the massive plant die-off of the K-T extinction

65 million years ago, fungi likely thrived on plentiful rotting vegetation. As they proliferated, fungal diseases could have contributed to the selection pressure that killed off cold-blooded dinosaurs, opening the door for the ascent of warm-blooded mammals. Casadevall’s theory is speculative at this point, but the high virulence, adaptability, and transmissibility of modern fungi show why fending off fungal disease could have been quite advantageous for our fuzzy ancestors. So it seems we have warm-bloodedness to thank for protecting us from most pathogenic fungi, with a few exceptions

. That doesn’t mean, however, we can just forget about the threat of fungi. Their ability to survive outside of hosts—whether in soil or other species or as spores—mean that it’s exceptionally skilled at getting to new places. Dispersal becomes an even bigger concern in an interconnected world where a single contaminated shoe can make its may around the globe in a day. Warm-bloodedness isn’t going to protect wheat crops or bats on the verge of extinction. That’s up to us. Images: Indiana Historial Bureau