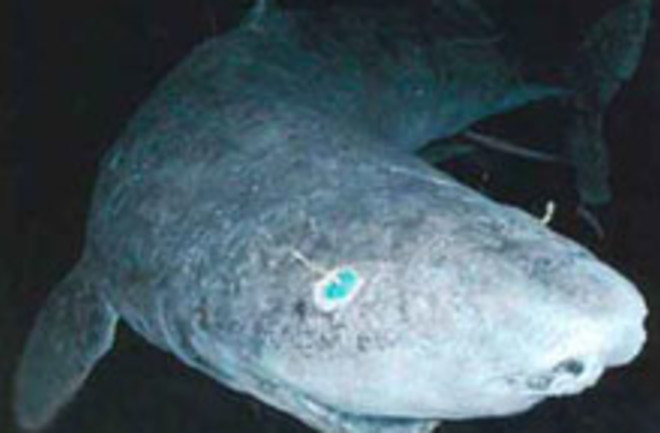 According to Inuit myth, a urine-soaked cloth was once whipped from an old lady's hand and carried out to sea, where it turned into a sea monster called "skalugsuak." Of its legendary peculiarities, skalugsuak lives for 200 years, has thousands of teeth, weighs over a ton, eats caribou whole, has skin that can destroy human flesh, and possesses—in place of eyes—living, glowing creatures which lure its prey. But skalugsuak isn't a fable—it's a real shark, whose flesh is so packed with urea that it smells and tastes like urine. Commonly known as the Greenland shark, the animal is the second largest carnivorous shark (after the Great White), and the apex predator of the eastern Arctic. When their carcasses have washed up, scientists have opened their stomachs to find eels, sharks, beluga whales, dog, horse, reindeer, and a lot of fish, and they've even been reported to hunt caribou in the manner of a crocodile ambush. But despite seeming like a pretty awesome research subject to tell your friends about, very little work is currently being conducted on the smelly monster, and virtually nothing is known about its behavior. Now Canadian scientists of the University of Windsor have taken on the task of tagging Greenland sharks to track their living conditions and location. Despite living at depths of over a mile, the animal doesn't play too hard to get when it surfaces—it can be dragged out of the water with one's bare hands. Image: Christine Williams