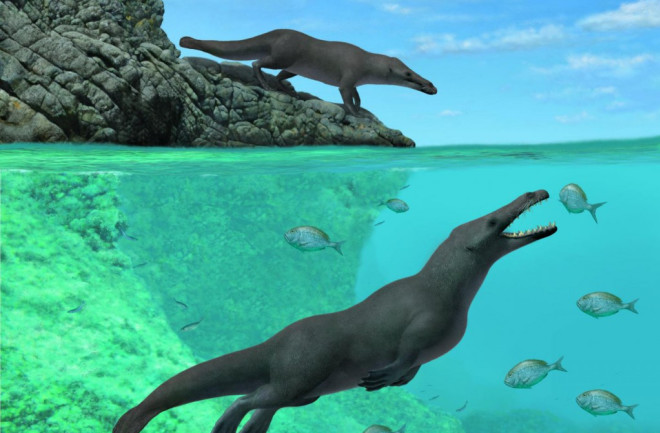 A pair of Peregocetus hunt on the rocky coast of Peru. (Credit: A. Gennari) Whales evolved from hoofed, four-legged land walkers in south Asia more than 50 million years ago. Now researchers have unearthed the skeleton of an ancient four-legged whale in Peru. The discovery sheds light on how cetaceans dispersed from the Indo-Pakistan region to the Pacific Ocean. “The new find from Peru is the geologically oldest quadrupedal whale from the Americas, so it gives a minimum age [for] when they reached the New World,” said Olivier Lambert, a paleontologist at the Royal Belgian Institute of Natural Sciences in Brussels, who led the new research.

Whale Of A Find

Lambert and an international team of researchers unearthed the ancient whale in Pisco Basin, a coastal desert region at the foot of the Andes in southwestern Peru. The researchers had searched for fossils of extinct marine mammals there before, but did not expect to discover a four-legged whale skeleton. “This was a major surprise,” Lambert said. The fossil hunters excavated the entire skeleton over about three days. The fossil was so well preserved the researchers were able to find the animal’s kneecap and small anklebones, and they could see that the finger and toe bones bore traces of tiny hooves. The fossil is the most complete quadrupedal whale discovered outside of India and Pakistan, Lambert said. And it was discovered in sediment that dates to about 42.5 million years ago, making the animal the oldest known quadrupedal whale in the Americas.

The bones provide clues about how the animal moved on land and in the water. The ancient whale’s hip was tightly attached to the sacrum, the triangular bone at the base of the spine that stabilizes the pelvis. And the proportions of its fore and hind limbs, as well as the small hooves at the tips of the toes and fingers, all indicated that the ancient whale could still walk on land, the researchers report Thursday in the journal Current Biology. But long toes that most likely belonged to webbed feet and features of its tail bones suggest the animal was an adept swimmer. The ancient whale probably used its webbed feet to paddle and its tail to propel itself through the water in a fashion similar to otters. That tail may have helped the ancient whale’s ancestors cross the ocean from Africa and arrive to the Americas, Lambert and his team think. “Because it is the oldest and due to some similarities with taxa from Africa, we propose that the most likely 'route' for these amphibious whales to the Americas was across the South Atlantic, at a time when it was considerably narrower than today,” Lambert explained. Lambert’s suggestion means that over the course of some five million years, whales’ ancestors traveled northwest from Pakistan over the northern lip of Africa before turning south. From the western coasts of central Africa, the evolving cetaceans then crossed the South Atlantic, finally moving up over South America to arrive in Peru. The researchers gave the fossil a fitting name, Peregocetus pacificus, meaning "the traveling whale that reached the Pacific."