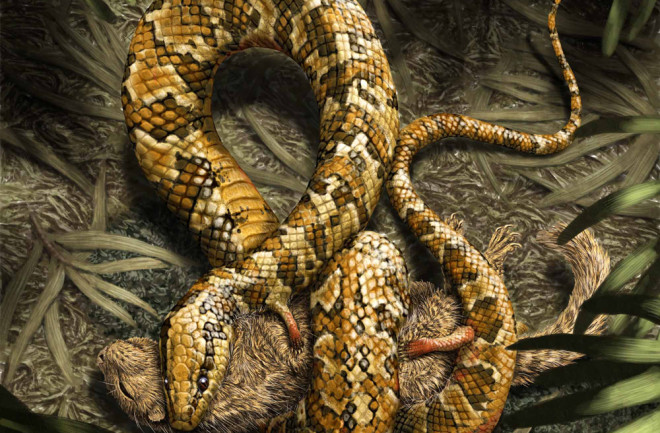 Tetrapodophis uses its arms and legs to grasp a meal. (Credit: Julius S. Cstony) Snakes’ earliest ancestors liked to hug it out. Scientists announced this week the discovery of a 113-million-year-old four-legged reptile fossil found in Brazil. That makes it the most primitive ancestor of modern-day snakes ever found. While scientists have previously identified ancient snake fossils rocking a pair of hind limbs, this is also the first four-legged snake scientists have ever seen. And the way this snake used its delicate arms helps clarify a longstanding debate about the snake family tree.

All Arms and Legs

The newly identified reptile, dubbed Tetrapodophis amplectus, is tiny. It measures just over 7 inches from snout to tail tip, and its arms and legs are just 4 and 7 milimeters long, respectively. But despite their small size, the snake’s limbs were quite well developed: It had long fingers and toes with claws at the ends.

The entire Tetrapodophis amplectus fossil. (Credit: Dave Martill, University of Portsmouth) Scientists don’t think Tetrapodophis used its limbs for movement, as it likely slithered from place to place like modern snakes. Instead, the lanky reptile used its limbs to grasp prey while it coiled around their bodies. The limbs were also handy for hugging another snake during a mating session. Given these observations, the name Tetrapodophis amplectus makes perfect sense. Tetrapodophis, the fossil’s new genus, means “four-footed snake;” and amplectus is Latin for “embrace.” Scientists published their description of the species this week in the journal Science.

Scientists have long debated whether snakes’ ancient ancestors were marine reptiles that eventually slithered onto dry land, or if they were landlubbers from the start. The discovery of Tetrapodophis certainly tilts the scales in favor of the latter scenario.

A close-up view of the ancient snake's feet. (Credit: Dave Martill, University of Portsmouth) By all appearances, Tetrapodophis lived on dry land and not in water. Tetrapodophis doesn’t sport a paddle-shaped tail, and it bears no signs of fins used for swimming. Instead, its short snout and long body indicate it was well adapted to a burrowing lifestyle – its limbs may have helped with the task of digging. Based on a genetic analysis of modern and ancient snakes, as well as other related reptiles, scientists positioned Tetrapodophis as the earliest ancestor of snakes we know today, further proof that snake ancestors stuck to dry land. Research suggests that snakes lost their legs by growing them more slowly and over a shorter period of time until they disappeared altogether. Ancient snakes' arms, perhaps, disrupted movements like burrowing, which made their limbs useless, paving the way for the streamlined snake species we know today.